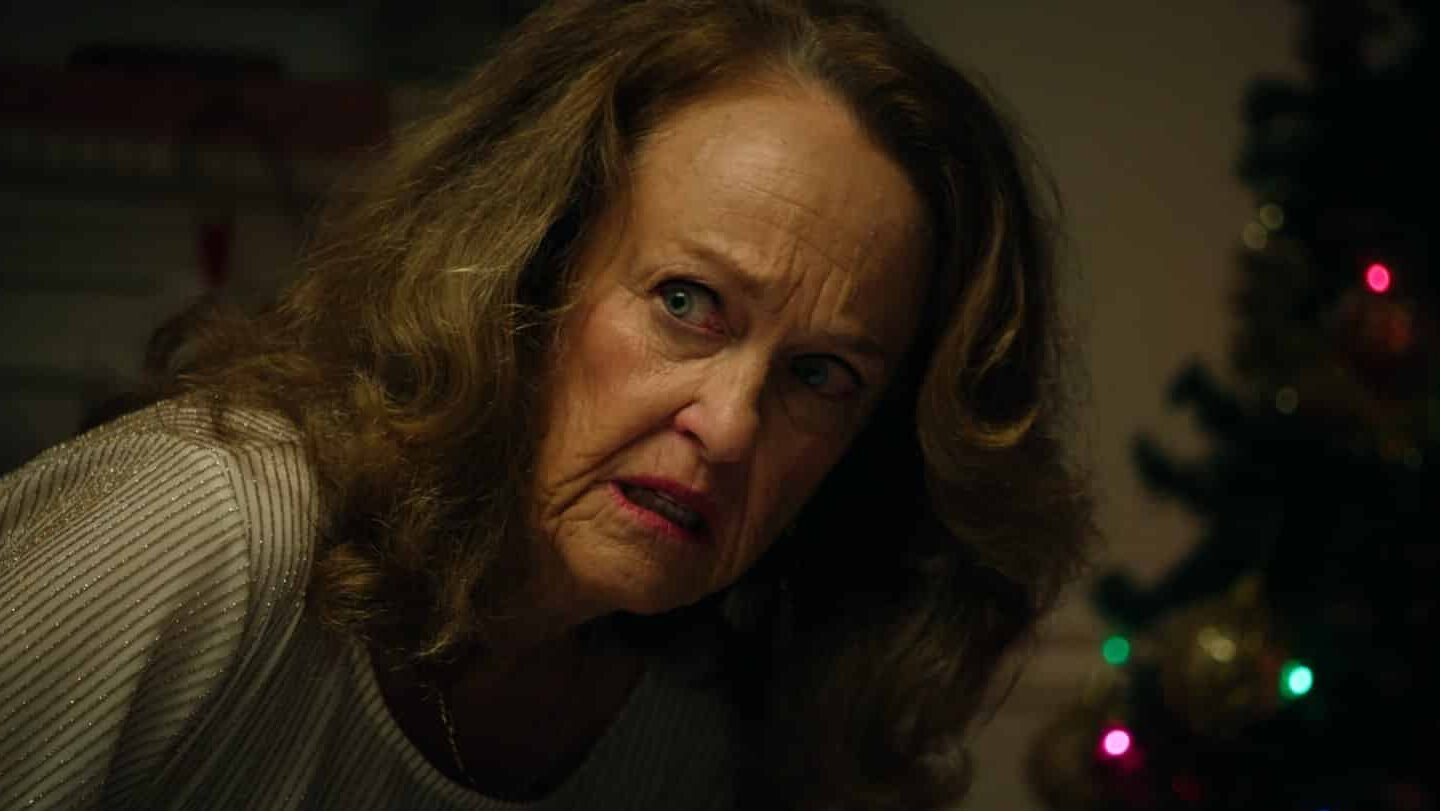 Two Witches, the feature directorial debut of writer/director Pierre Tsigaridis, is built almost entirely on the sense of dread that it seeks to instill in the audience. Before the title card appears, we’re treated to a scene of two women attacking (and possibly eating) a baby. Shortly after that, the film offers the first of many dream/hallucination/surreal sequences.

Between these two sequences, there’s a brief scene of a pregnant woman, Sarah (Belle Adams), and her boyfriend, Simon (Ian Michaels), at a restaurant. An older woman stares at Sarah before appearing behind Simon outside the restaurant’s window and blowing out a candle. Unfortunately, there’s not much to go on when the film drops the audience into its first suspense sequence of Sarah waking up in the night and checking on a sound from the bathroom that culminates in a vision of Simon’s head twisting and turning.

And that’s part of why Two Witches never cohered for me. It offers up horror sequence after horror sequence without enough introduction to its characters. So I was never invested in them when I was supposed to be on the edge of my seat. Of course, this lack of investment wouldn’t be an issue if these sequences were purely viscerally compelling or if the film established a thick enveloping atmosphere. It could coast on pure style, but sadly it’s never able to get there even though that seems to be the goal.

An Anthology Or Not?

It’s unclear for some time while watching whether Two Witches is an anthology film or not. After the title card, on-screen text welcomes us to “Chapter I: The Boogeywoman.” But the second chapter only begins halfway through the film, seemingly after an entire story has been told in the first chapter of the film. Eventually, the story in the second chapter connects with the first, but it takes some time.

Two Witches may have benefitted from committing entirely to an anthology format. The second storyline, centered on a strange and possibly dangerous young woman named Masha (Rebekah Kennedy), managed to draw me in much more quickly than the first. In fact, the second story takes a bit of a dip when it connects with the first. It feels as though the movie is trying to play a fun trick by dovetailing the two plots. Instead, it ends up dragging down the more interesting second story into the less exciting narrative of the first.

This combining of the narratives is even more disappointing as there are literal signs (a missing sign and an office hierarchy sign) highlighting that these stories take place in the same universe without bridging them early in the second story. That mysterious connection feels more fulfilling than what the film offers by clearly tying its two plots together.

Two Witches has ambition, which is always welcome, but it doesn’t always have the execution to pay off that ambition. The crisp visuals of the film feel at odds with its trashy (complimentary) roots as a movie about scary women terrorizing people. Especially so because it feels like Two Witches wants to be considered part of a tradition established by the genre films of the 1970s. Slapping a grain filter on the movie certainly wouldn’t have fixed all of its problems, but it may have made it more stylistically coherent.

That ultra crisp look does work for the movie in some sequences, though, particularly later suspense sequences with single source lighting; a scene lit only by a lighter is especially beautiful. And in the few moments of gore, we can see the love that went into creating detailed practical effects. However, that makes one wonder why there isn’t more gore in the film. Some surprising and compelling digital effects distort characters’ faces in unnervingly surreal ways.

The most damning thing that can be said about Two Witches is that it relies too heavily on musical swells that might pay off in something horrifying. It’s a classic technique that can be used effectively, but by about the fourth time this happens within the first chapter, it stops being effective and starts being frustrating. It feels like a crutch that Tsigaridis leans on often and with relatively little success.

Tsigaridis has the bones of something all-out fun here, but Two Witches is held back by its fragmented story and often unsuccessful attempts at creating atmosphere. The movie’s “To be continued” ending feels like it could just as likely lead to something that includes some fun moments in an otherwise mediocre film or go all out on the gore and sexuality that make minor (exciting) appearances here. Two Witches certainly isn’t a bad movie, especially for a first feature, but its reach exceeds its grasp too often.

Two Witches is streaming on ARROW on October 1.