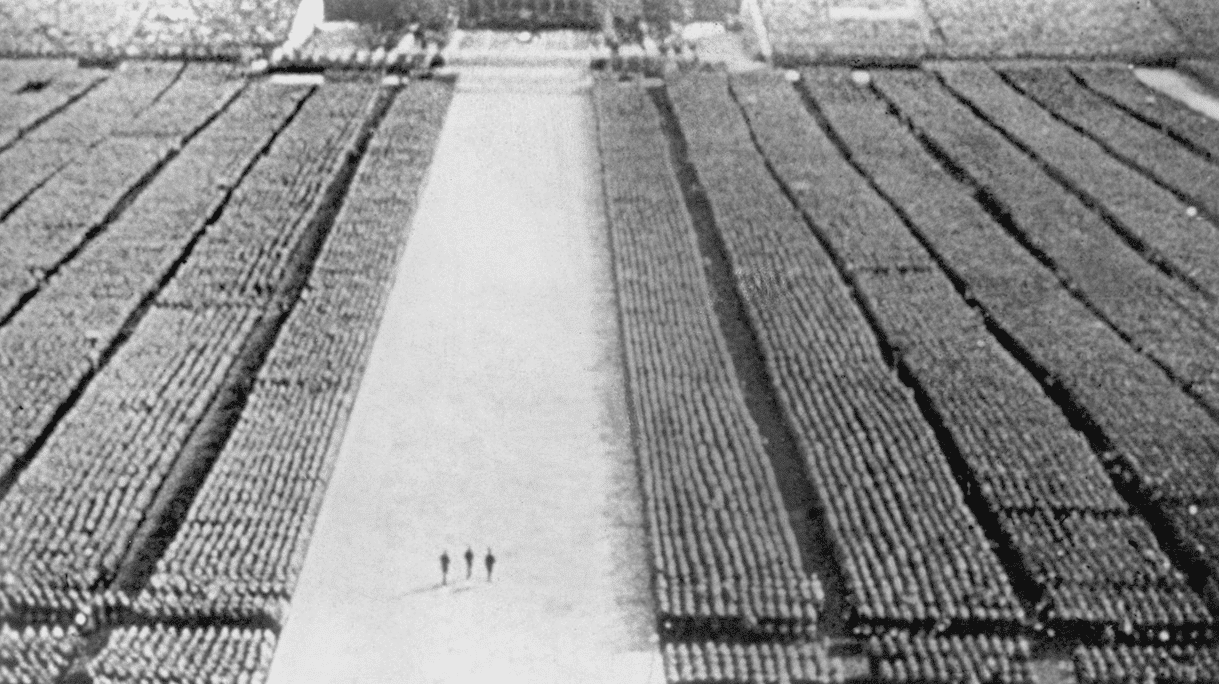 If you ever thought Wedge's “Look at the size of that thing” was a classic Star Wars line you'd be right. But if you thought it was an original scripted line penned by George Lucas, you'd be wrong.

The dialogue was lifted straight from the classic war movie, The Dambusters.

The script of A New Hope was inspired by many things. Gandalf. John Carter of Mars. And even Spock from Star Trek directly inspired Obi-Wan's famous quote about a million voices…

This movie is loved by many a filmmaker (Peter Jackson nearly made a remake with Christian Rivers) and George Lucas loved it so much he nicked a key plot point from it and gave it a great spin.
The plot point in question is the part of The Dambusters where Allied bombers bounced bombs across the surface of the Ruhr River to explode against the base of a huge Nazi dam. The pilots had to get their launch just right or the bomb would not blow the dam's structure at the right point, causing the entire damn to collapse.
Sound familiar?
That's right. It's the trench run and the firing of the torpedoes at the tiny target of the Death Star's exhaust port! Lucas even borrowed the line “Get set for your attack run!” and the “How many guns do you think…” from the other movie. 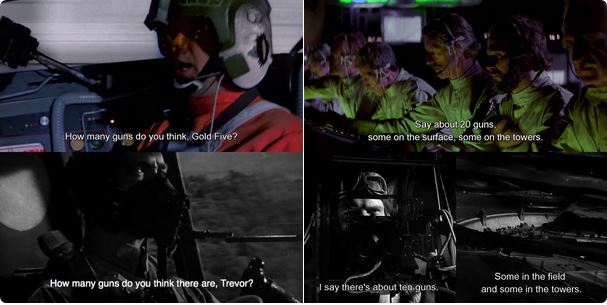 The Guns of Navarone

Star Wars producers also managed to borrow the premise of the Gregory Peck starrer, The Guns of Navarone to add some real urgency to the proceedings of attacking a Death Star.
The film is set on a fictional Greek island called Navarone in the Aegean Sea where the Nazis have built a pair of radar-controlled super cannons. The guns threaten the evacuation of British troops on nearby Keros Island.
In Guns of Navarone, Peck's squad of commandos race to destroy the Navarone super guns before the British transports get within their range. This mirrors the fleet's race to destroy the Death Star before it can fire on Yavin IV – although it wasn't positioned that way in Lucas' first edit.
The Death Star’s laser-firing sequence also follows quite closely the firing sequence for the super guns on Navarone, nearly shot for shot!

You might not think of it as a war movie but the beloved Casablanca, starring Humphrey Bogart is set against the backdrop of war.

The Mos Eisley spaceport sequence 45 minutes into Star Wars basically a giant riff on Casablanca.
Most of Casablance takes place in Rick’s Café – the original, unproduced play the movie was based on is even titled, “Everyone Comes to Rick's.” In Star Wars, Lucas created Chalmun's Cantina.
You know the drill, shady under-the-table deals are made in dark corners, Figran D'an's swing orchestra providing ambiance, and alien barflies smoking pipes and hookahs.
Han Solo is somewhat modeled on Humphrey Bogart’s all-encompassing cynicism and they both seem to have fondness for the word “kid.”

Lucas also shoehorned in some of the Clint Eastward classic film The Good, the Bad, and the Ugly into the Cantina scene too. The Han Solo face-off against Greedo is inspired directly from a scene set in a bar in that movie.

Han Solo demands 15,000 credits to transport Luke and Obi-Wan to Alderaan. Strangely enough, the boat passage fare out of Casablanca costs the sum 15,000 francs! Exchange rates and all…
Did you know that Jabba the Hutt was originally written as a part of ANH? In the Special Edition, they added his scenes back in with a CGI Jabba over the actual humanoid version of the character that was filmed with Harrison Ford in 77.
Jabba's character is a direct homage to Sidney Greenstreet’s cunning and portly nightclub owner, Signor Ferrari – with the original concept artwork for Jabba even featuring him wearing a fez hat like Ferrari.

Side note – Boba Fett from The Empire Strikes Back was inspired in part by Eastwood's Man with No Name from those Spaghetti Westerns.

The movie 633 Squadron features a heavy squadron being sent to Norway to bomb a V-2 rocket fuel plant as the main mission. A crucial side plot has Norwegian resistance fighters seeking to disable the anti-aircraft guns that protect the fuel plant.
Sound familiar? Han Solo's mission to disarm the shield generator on the small moon of Endor…

Triumph of The Will

Yes, Star Wars even drew on Triumph of the Will, a 1935 German propaganda film directed, produced, edited, and co-written by Leni Riefenstahl.

It chronicles the 1934 Nazi Party Congress in Nuremberg, which was attended by more than 700,000 Nazi supporters – a key moment is Hitler entering the rally, walking up through the throng of Nazis. Does that look familiar?

We totally speculate that this was just the kind of film that Lucas would have seen at the USC film school. He was ballsy enough to take that imagery and use it for the Star Wars medal ceremony where Chewie, Luke and Han walk up to receive their medals from Princess Leia!

Lucas was not actually afraid to take notes from the era – Stormtroopers are so named for the German soldiers and Darth Vader is basically a leather clad Nazi!

The Force Awakens scene where Admiral Hux addresses his troops on Star Killer base also harkens back to this era and the imagery associated with Nazi propaganda.

There are many other movie and book influences on Star Wars. We haven't even mentioned Flash Gordon, the Dune movie, Ben Hur, Lawrence of Arabia or even Robby the Robot from Forbidden Planet!
This article was produced and syndicated by Wealth of Geeks.

Designed to be Your Ultimate Travel Companion, This AI-Powered App is Disrupting the Travel Industry