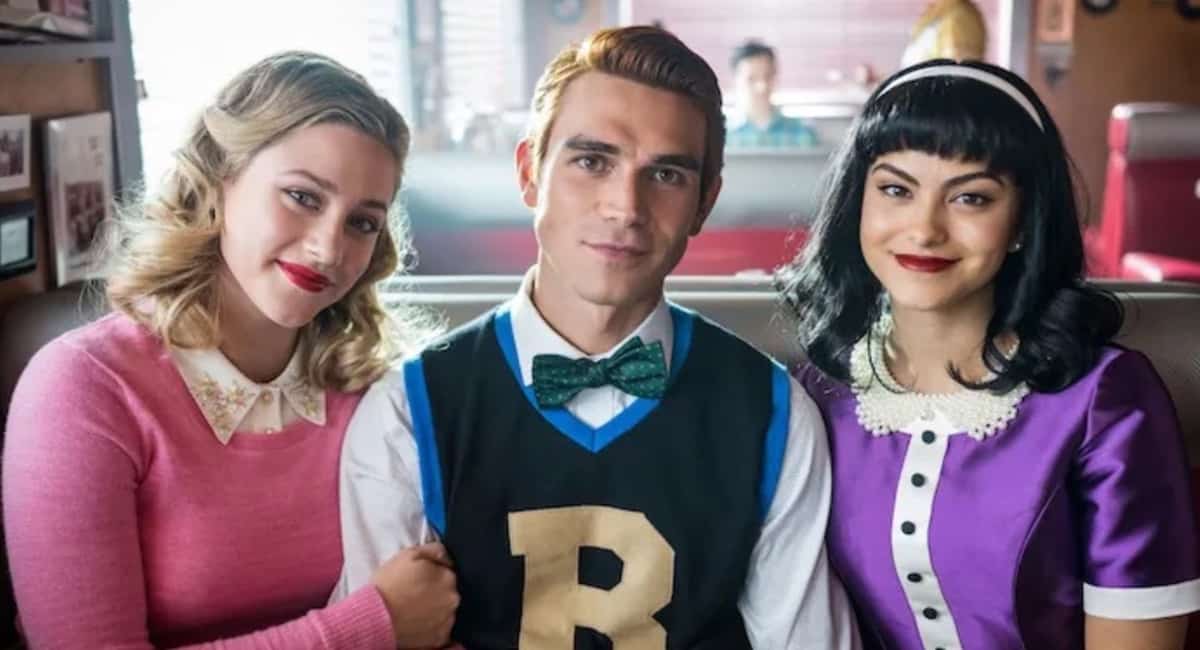 Riverdale is absolutely off the trails most of the time. Not that it’s necessarily a bad thing but you just sort of have to know what you’re going into when you’re watching it. A show that brings together musical moments and comic characters that have a cultural importance, the CW hit has gone through quite the journey since it began and while if you told me then that Betty, Archie, and the team from Riverdale would eventually have superpowers back then I wouldn’t have believed it, now? It makes sense.

So let’s break down a bit of what makes Riverdale wild and explore 10 of the weirdest things that they’ve done on the show!

If you stop and think about the weirder moments on Riverdale, this might be something you forgot happened but if you recall, Nick St. Clair tried to drug and rape Cheryl and when the girls found out, they went to beat him Nick while singing “Out Tonight” from the musical Rent. Yup, all that happened on this show and that was in season 2 so that’s when things were relatively tame in comparison to where we are now.

Basically, the girls go to get revenge on Nick St. Clair and are singing the Mimi song from Rent while beating him up and while it is a message of strength against those trying to hurt others, it is a group of teenage girls singing Rent and beating up a man for abusing their friend. The key part in this is that they’re singing a song from Rent so whatever message the scene did have got a bit lost in everyone screaming “WHAT?!” while watching from home.

The Next To Normal Episode

As a fan of the musical Next to Normal, I was not excited for Riverdale to tackle the show. I was right in that feeling. Smashing the themes of Next to Normal in one episode, Riverdale focused it on the death of Polly Cooper and how Betty and Alice were coping with it. The problem there is that Next to Normal is about Diana Goodman refusing to accept the death of her son years after his death as a baby and how it affects her mental health and that of her marriage.

Famously, Alice Cooper’s husband was the Black Hood killer and is dead. So it meant that Betty had to play not only the part of Natalie Goodman in the musical but also basically every other character for Alice. It barely worked and led to weird changes to some of my favorite songs in musical theatre for no reason other than they just liked the musical.

The show Hedwig and the Angry Inch is an interesting one to say the least. The John Cameron Mitchell masterpiece had a cult following until it finally got a Broadway run starring Neil Patrick Harris a few years ago. So a bunch of teenagers wanting to do a song from it at their school talent show isn’t unheard of. But what made the situation oh so very Riverdale was that their solution to their principal telling them no was to aggressively sing “Sugar Daddy” at him.

Now, if there was any song in Hedwig and the Angry Inch that would turn some heads in a high school setting, it’s this one and Cheryl Blossom sings it at their principal to try and help. Which is odd given the song that Kevin wanted to do is a sweet song! All they had to do was show him the lyrics maybe but this made it worse and then the entire school just kept singing the songs at the principal and it was an odd one!

Betty Going to Work for the FBI

Riverdale loves to short of half commit to an idea. I wanted them to commit to doing American Psycho the Musical and all they gave me was a knock-off name of Brett Weston Wallace but what was really weird was their maybe attempt at Silence of the Lambs where Betty suddenly worked for the FBI and would profile killers like Clarice. Why? I don’t know it’s Riverdale. But the show focused Betty’s energy on being a detective as if they didn’t also establish that she had the serial killer gene seasons prior. Again, a very real thing on this show.

Is it just that her working for the FBI makes no sense given that she was set up as a reporter for most the first half of this show? Yes. That’s exactly it but then suddenly she’s an FBI agent who has a headquarters out of Riverdale because that’s high up on the FBI watch list I guess!

Opening a Speakeasy as Teenagers

Veronica Lodge loves to get revenge on her father, Hiram. And as a smart and savvy businesswoman, she started her capital long before she got out of high school. Which includes a speakeasy in the basement of Pop’s that everyone just lets happen despite the fact that Veronica is supposed to be in high school. I honestly couldn’t ever figure out if it was an actual bar with alcohol or not but they did have gambling there that just continued on despite the son of the sheriff being there all the time so probably.

The thing is: Riverdale relies heavily on the lot of us just running with whatever nonsense they present to us. And for the most part, we do. Like Veronica running a speakeasy at the age of 16 or however old she was. And the fact that sometimes the parents are there? Just accept it! And we did!

So just so you’re all aware, Chad Michael Murray had a cult. One that he tried to escape from by Evel Knieveling his way to the moon on a rocket. But he has a “daughter” who goes to high school and recruits people into the cult that preys on their secrets to keep them all there and part of it and Betty is seemingly the only person who sees it as a bad thing for a while and everyone else just thinks it’s a cool fun cult.

Honestly, the part of this that made the most sense was Chad Michael Murray trying to ride a rocket to space but it’s all just part of Riverdale’s weird need to have an overarching odd story each season when the town of Riverdale is weird enough without an out of town cult rolling in to disrupt their high school problems and love triangles.

Cheryl Blossom struggled with the death of her twin for a lot of the show thus far and while it was understandable for quite a while, it then took a twist that no one really wanted for her or for us as an audience: She suddenly had Jason Blossom’s dead body she would talk to like he was still alive and well.

In retrospect, Cheryl had a lot of issues she needed to work out but rather than show her going to get help and have someone listen to her, the show had her put Jason’s dead body in a chair and she got to pretend like her brother was alive and well still. Honestly, this is not that shocking for Riverdale but it is just one of those things that you go “oh right, Cheryl used her dead brother’s corpse to talk to for a while” while talking about the show.

For an entire season, we thought Jughead was going to die. We should have known better, it’s Riverdale. They won’t kill him off. But they sent him to some weird private school where his “friends” maybe took him into the woods and killed him and everyone kind of went along with it. Basically, they were all trying to get the kids from his new school in trouble for attempting to hurt him and it turned into the most confusing season of television I have ever watched.

They were trying for mystery but then also brought in a whole new school of characters that no one cared about and it resulted in everyone just being confused as to why Jughead was there in the first place. And I am still not sure if he was ever almost dead or if he did die or maybe the show died and we’ve just been dreaming it up ever since.

Betty Killing Archie To Have a Baby

Just when you think that Riverdale has done it all, Betty Cooper sacrifices Archie Andrews so that she can have his baby. Not even lying. Granted, it happened in whatever weird timeline they did where everyone slowly got killed off but still: Archie Andrews was murdered so that Betty Cooper could have a baby. She instantly lost the baby so Archie died for nothing but the show did take us on this journey with Betty where no one seemed to care that Archie was murdered?

The mirror universe was filled with questionable storylines but the fact that Archie was just killed so Betty could start a family on her own is…certainly a choice! Again, none of this really matters because it was all some Twlight Zone experiment for the show but still. Archie was killed in a ritual and that’s a thing that happened in the parallel world of Rivervale (yes, it had a new name). Just when you think that Riverdale has done it all, Betty Cooper sacrifices Archie Andrews so that she can have his baby. Not even lying. Granted, it happened in whatever weird timeline they did where everyone slowly got killed off but still: Archie Andrews was murdered so that Betty Cooper could have a baby. She instantly lost the baby so Archie died for nothing but the show did take us on this journey with Betty where no one seemed to care that Archie was murdered?

The mirror universe was filled with questionable storylines but the fact that Archie was just killed so Betty could start a family on her own is…certainly a choice! Again, none of this really matters because it was all some Twlight Zone experiment for the show but still. Archie was killed in a ritual and that’s a thing that happened in the parallel world of Rivervale (yes, it had a new name).

The Multiverse of Riverdale

The town of Rivervale brought us into an alternate reality where Jughead was maybe living out the play Bug with Tabitha but also everyone dies and they have to bridge the timelines together or the universe as we know it would collapse. Aside from that, the mirror universe included a Veronica Lodge Uncut Gems storyline, the Archie sacrifice, Jughead thinking he had bugs, and more!

Oh, also the devil. Lucifer came to town and Veronica made a deal with him at one point after Reggie tried to give her up instead so it was a sea of everyone dying for one reason or another. Why did they do this? I don’t know it’s Riverdale. I had fully given up trying to understand what happens seasons ago. But the multiverse of madness therein was arguably the weirdest thing this show has chosen to do. And remember: Chad Michael Murray tried to ride a rocket to the moon.

Why Should I Care About Personal Finances? The Effects of Money Mismanagement on Your Financial and Mental Health