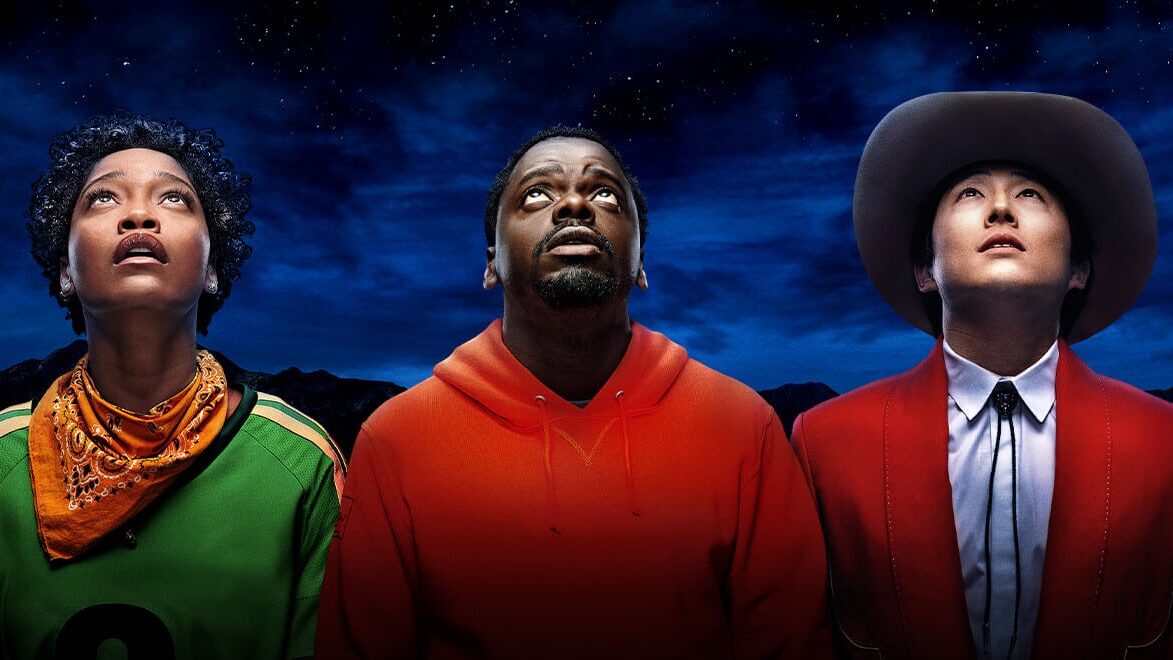 Make way everyone, because Jordan Peele has returned, and there’s no way you can predict what he’s bringing to the table. After the chilling restraint of Get Out, he went all in on batshit symbolism for Us, and with Nope he’s…well, kudos to him for keeping the plot under wraps, but even if you know the bare bones, with Peele, you just have to be there. On the biggest screen possible.

Nope may revolve around some close encounters, but it has far more in common with the lean mean westerns of the 70s than with the big budget spectacles we’ve come to expect when aliens get involved. Or at least it would if Peele could get all the pieces of his intricate puzzle to coalesce into a bigger, cohesive picture.

The main question is, what happens when a conquering nation has conquered everything? According to Nope, you switch it up and capture everything. The concept threatens to consume OJ (Daniel Kaluuya) and his sister Emerald (Keke Palmer reminding you her comedic timing is pitch perfect) after they witness strange happenings at their isolated family ranch.

Risking is All to Make Bank

And since it’s fallen on hard times, their first impulse is to profit off the occurrences, only to realize they may not live long enough to cash in.

There’s some justification for why they stay on, which involves a family legacy that changed Hollywood. Still, Nope refuses to sentimentalize too much about just why the siblings, and eventually, a tech guy named Angel (Brandon Perea, hopefully kicking off a long big screen career), risk their lives to get photo or video evidence of what’s happening.

OJ and Keke are fighting for their land, but they’re also up against a greater force, and triumphing will allow them to leave their footprint behind, thus granting them money and fame – everything left to desire in a world that offers fewer and fewer options to survive, let alone a chance to be immortalized.

The journey is somewhat incoherent and not exactly scary. Kudos to Peele because after a couple of fakeouts, he is determined to give audiences something they can’t explain away, and the phenomenon is no less frightening when the camera reveals all or most.

It’s still not enough to connect various threads about our appetite for spectacle, the commodification of trauma, and our undying refusal to disbelieve that we can profit off of ultimately untameable forces of nature without consequences, but when Peele has performers like Kaluuya, Palmer, and Perea, it’s still more interesting than most nonsensical theatrics.

In a world so stripped down to its essential survival instincts, there’s no need to worry over sinister government agencies trying to move in or other conspiratorial forces slowly surrounding you; there’s TMZ to fear, which is apparently more tapped in than anyone. Even their neighbor Ricky (Steven Yeun), a sort of competitor whose entire, very profitable image is built on putting a smiling, tourist-friendly face on his own bloody past, is no real threat.

When you learn all the wrong lessons from history, it tends to repeat, not to your benefit. If triumph is possible in Nope, it comes not from superintelligent tech but from learning from experience and going analog rather than digital.

No doubt there will be much debate on the various and layered symbolism scattered throughout Nope, much in the way the tiniest details of your typical Kubrick picture are still ferociously dissected. But chances are the simplest explanation will serve for both: a skilled filmmaker took some great concepts and knew just how to throw them at a wall to ensure enduring fascination for us all.

Hey, if it works, it works, and as for the rest? The ensemble chemistry is enough to coast on. Just don’t look up.

The New Star Wars Docuseries You Need To Be Watching