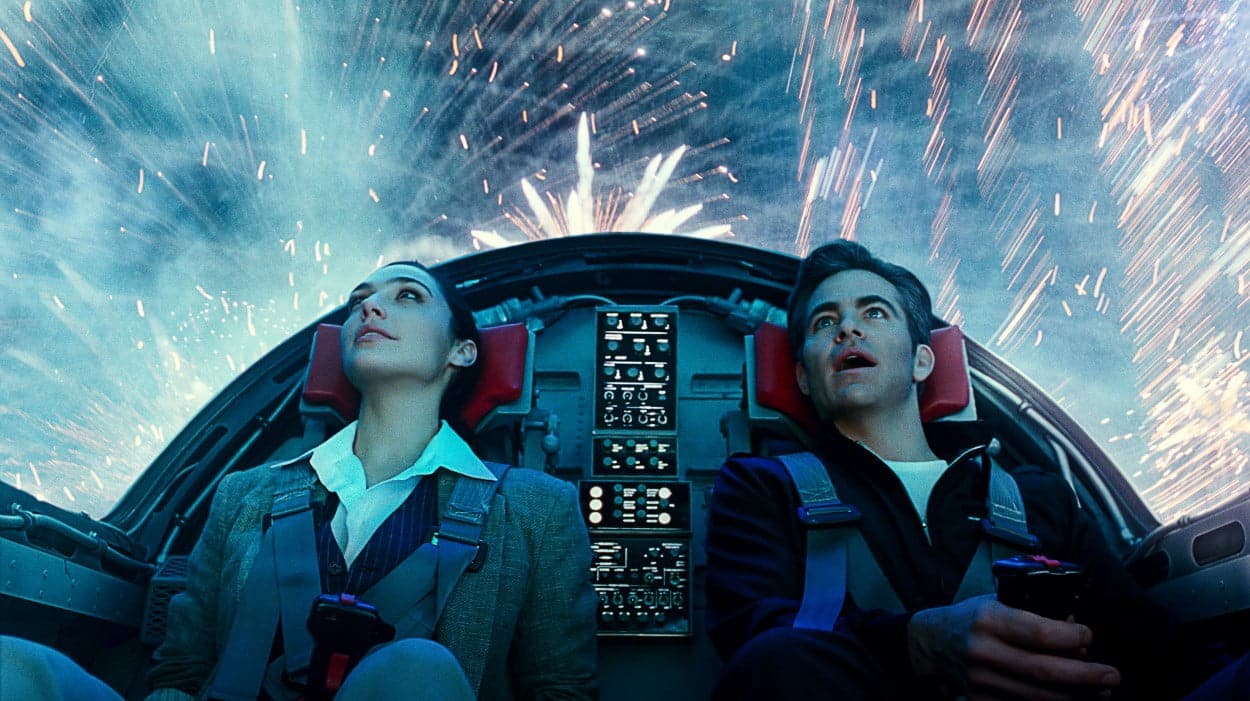 All sequels are burdened with the curse of comparison. While Wonder Woman: 1984 may be the sequel to Wonder Woman, we can’t keep looking behind us.

Full Disclosure: Over the summer of 2018, I had the immense pleasure of working for thirty days on Wonder Woman: 1984 as they pulled Washington D.C. back into the eighties. A true highlight of watching the film from the comfort of my own home was able to pause every time I spotted myself. Look, I’ve waited two long years to see this film after giving it my blood, sweat, and tears, and I recognize that I’m biased when I say that Wonder Woman: 1984 is a joyous delight. 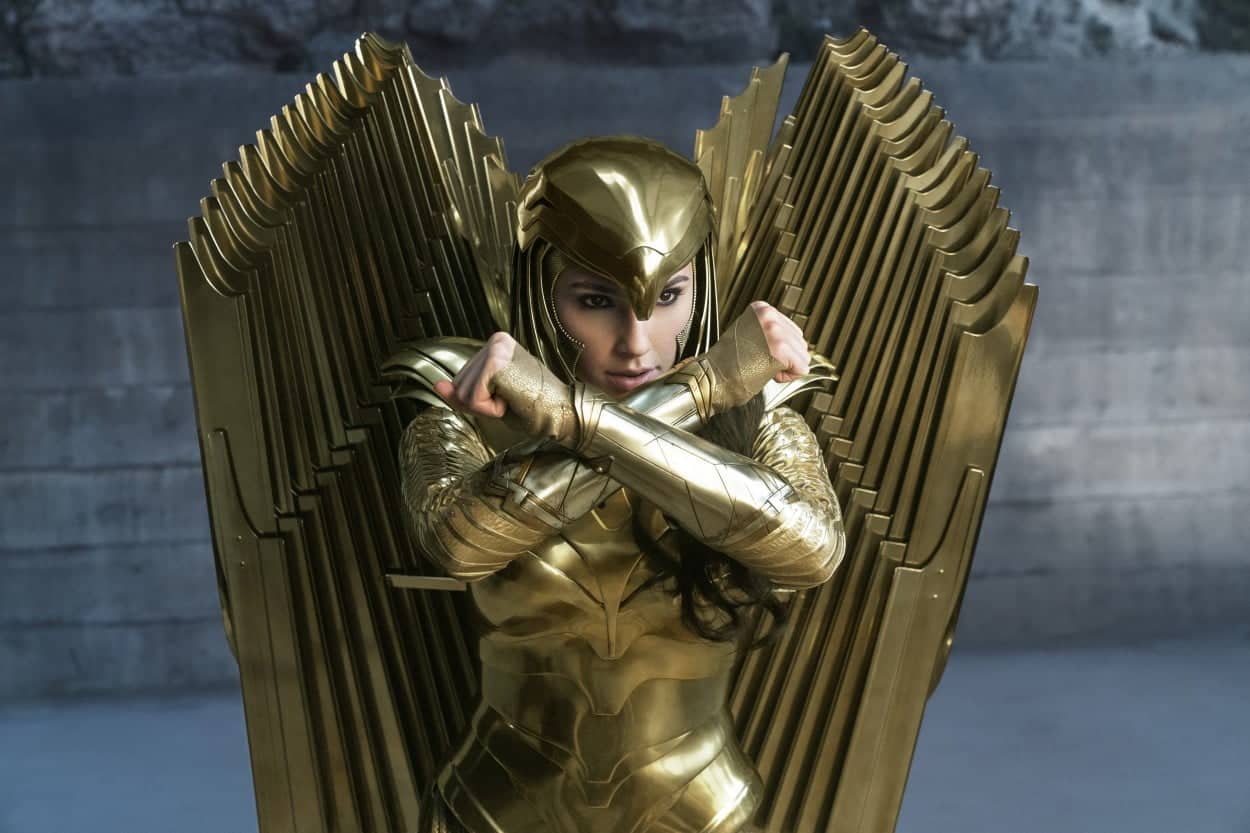 Wonder Woman: 1984 is the Gift We All Needed

This review contains mild spoilers, and you should consider yourself lucky that you didn’t have to endure me narrating my own home viewing. (“Oh, that stunt guy was so sweet!” / “This took forty takes.” / “People are going to think they’re CGI cows!” / “There’s my mom!”)

The prologue to Wonder Woman: 1984 takes us back to Diana’s childhood on Themyscira as she competes against her fellow Amazonians in an epic American Ninja Warrior style obstacle course. When Diana (Lily Aspell) takes a shortcut and is forced to forfeit a triumphant win, Antiope (Robin Wright) imparts an important message that ultimately sums up the entirety of the film in a single line: “No true hero is born from lies.”

In 1984, Diana (Gal Gadot) is still the Wonder Woman we all know and love from Wonder Woman and Justice League. She saves a jogging woman from getting hit by a car, rescues a bride, and sweeps in to save the day when a mall gets held up by four comedically 80s goons (love you, Brandon) who have stolen priceless artifacts that were being sold out of the back of an innocuous jewelry store.

Nearly seventy years have passed since Steve Trevor died, but Diana still carries that pain weight. Personally, I don’t blame her. I, too, would pine after Chris Pine for the rest of my life. I found this to be an interesting plot point in the film. So often, people lament about female superheroes not “needing” love, as if they’re meant to exist in a glass box, untouched by the affection that male superheroes are allowed. I don’t know if Patty Jenkins intentionally set out to make this point, but I loved how it was handled. 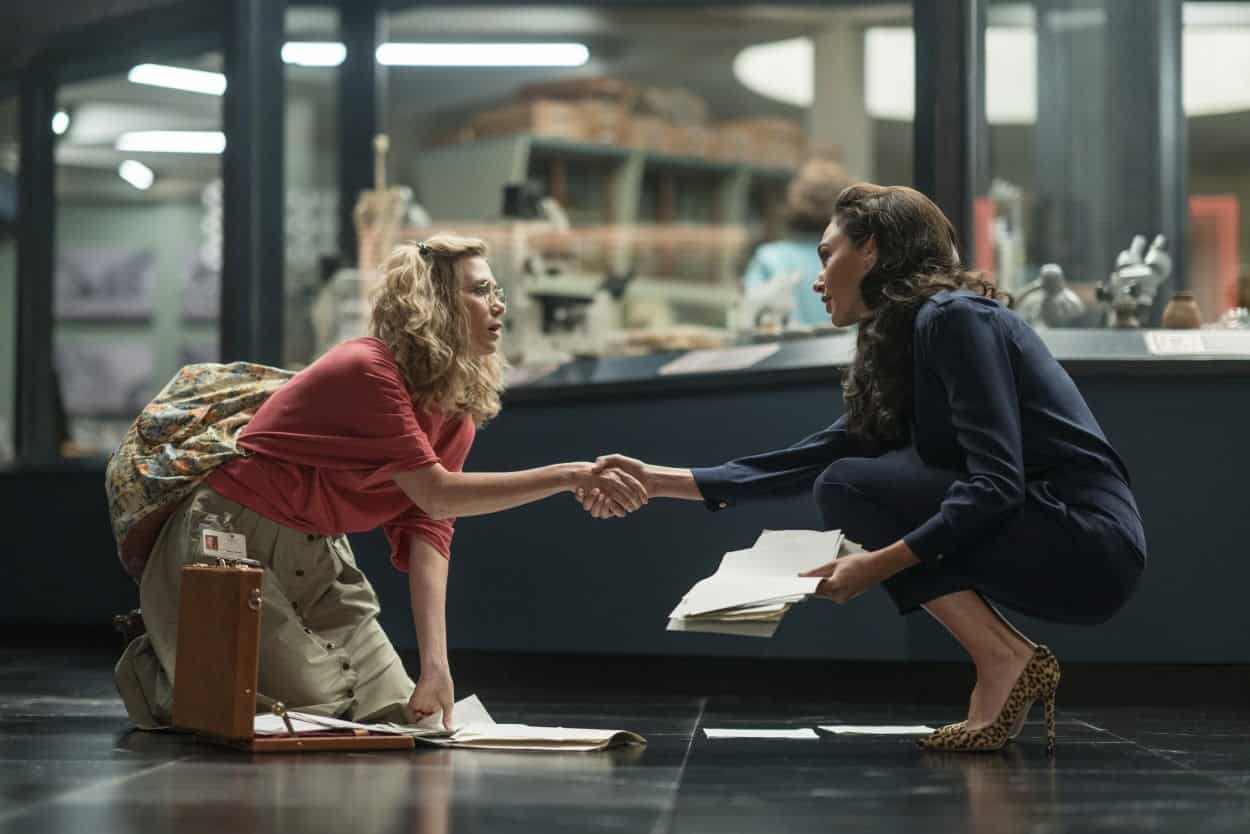 After Wonder Woman apprehended the mall crooks, the stolen merchandise winds up in the hands of the F.B.I. and is ultimately turned over to the Smithsonian for dating and analysis. Diana, now a cultural anthropologist at the Institute, is introduced to her new colleague, Barbara Minerva (Kristen Wiig), a wholesome, awkward, and largely overlooked person.

How convenient is it that those four criminals got their hands on a mythical citrine stone that just so happens to grant wishes? While Wonder Woman carries a sort of gravitas that seems to elevate it above its peer media in critics' eyes, it is important to remember that it is a superhero movie and that superhero movies often run fast-and-loose with rules, villains, and moral dilemmas. Convenience is the essence of all superhero movie plots that don’t aim to deliver doom, gloom, and hard-to-hear audio mixing.

Diana, still mourning her beloved Steve Trevor, knows precisely what wish she would make, Barbara wishes to become powerful and sexy, and Maxwell Lord (Pedro Pascal) sets his sights on a loftier wish. 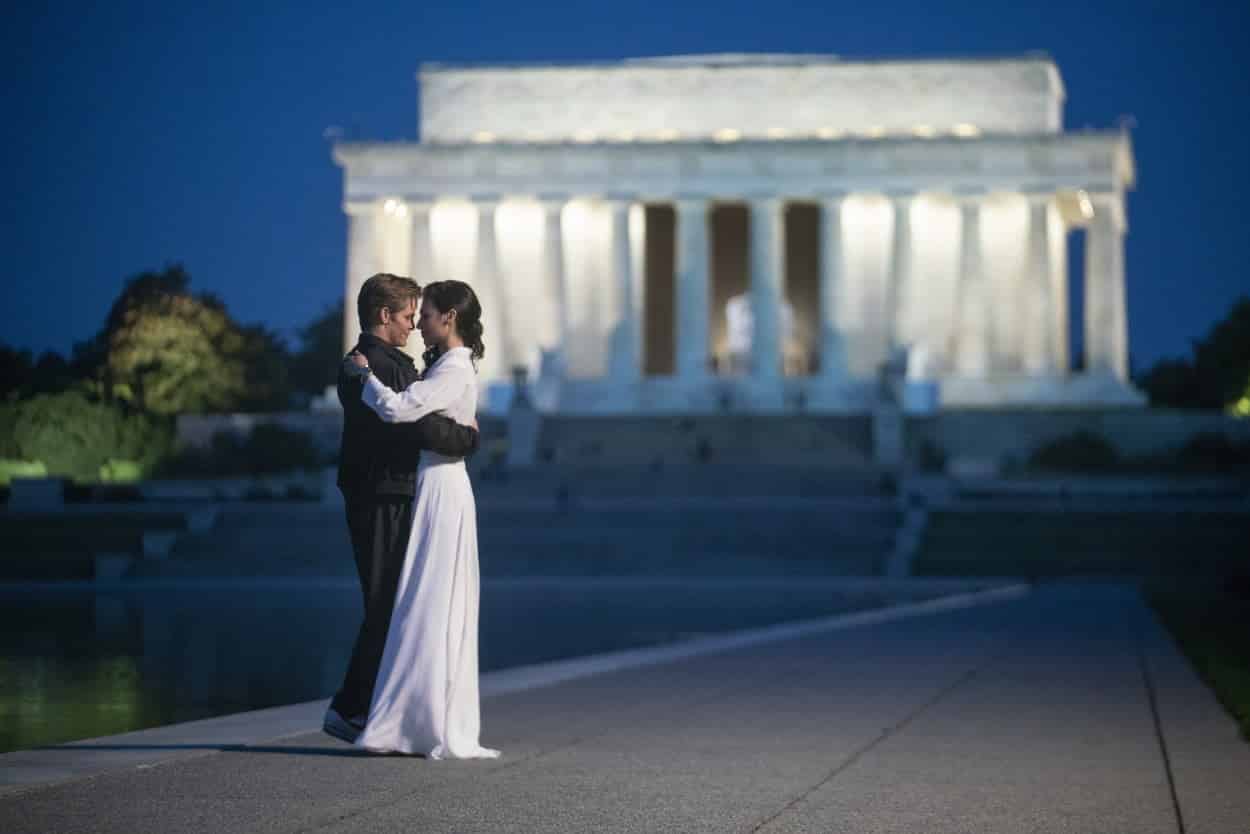 Chris Pine’s return to Wonder Woman: 1984 has long been a source of speculation since Steve Trevor went out in a blaze of glory, and he returns to us (and Diana) in the body of Hallmark movie heartthrob Kristoffer Polaha (billed as “Handsome Man”). After they are reunited at a glitzy gala hosted by Maxwell Lord, Patty Jenkins makes up for that dimly lit kiss from Wonder Woman.

If you loved the sequence in Wonder Woman where Steve shows Diana the wonders of 1918  London, you would love Steve’s introduction to the 1980s. I might be very biased because I witnessed these moments firsthand, but Pine does well with wide-eyed wonder as Diana shares escalators, the Metro, the Hirshhorn Museum, and the Air & Space Museum with him. But all good things must come to an end. 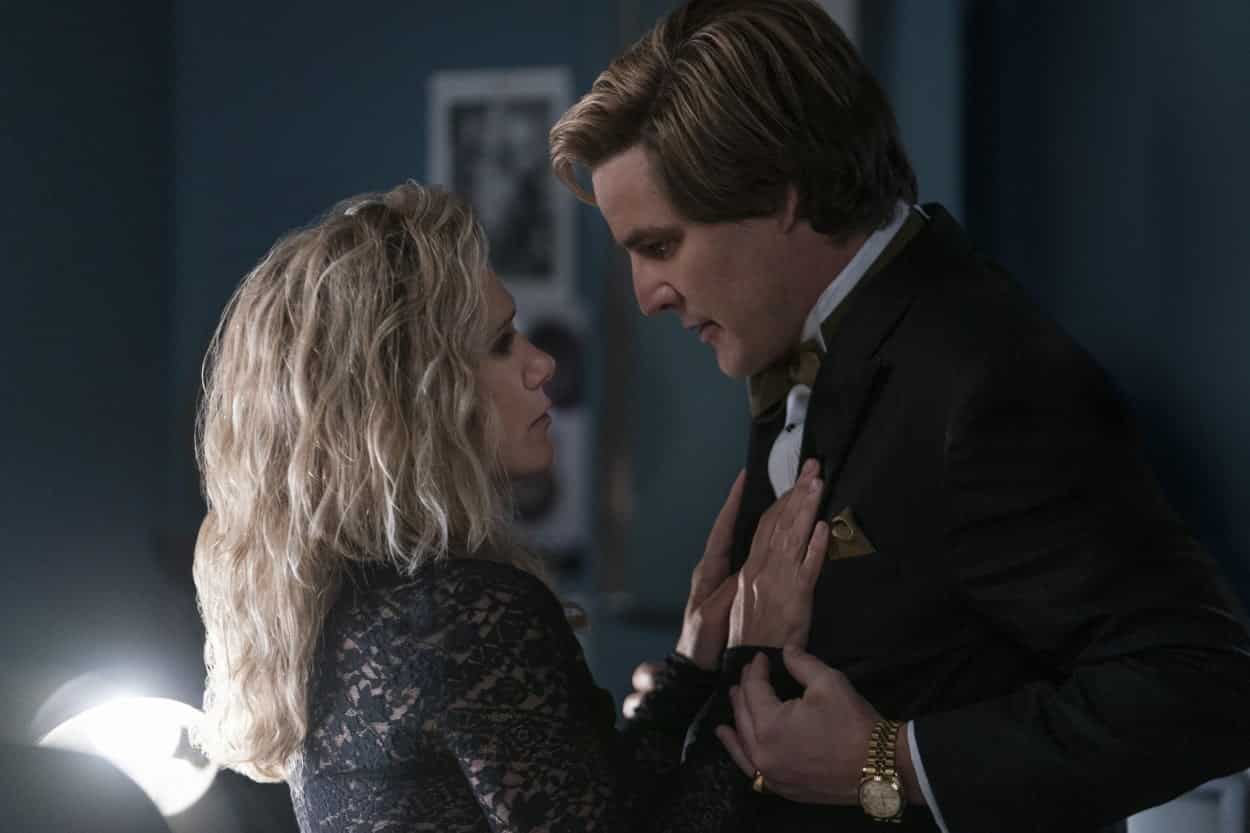 Barbara’s desire to be wanted allows the citrine “wishstone” to fall into the hands of Maxwell Lord, and slowly the world dissolves into chaos at the hands of the power-hungry mad man. With some assistance from Barbara, Diana and Steve work to figure out how the stone grants its wishes. Unfortunately, they are wishes built on lies, and they all come with “a monkey’s paw” caveat.

There is no mistaking who Pedro Pascal’s Maxwell Lord is inspired by. If you’re having trouble identifying the undeniable influence, look no further than this line: “I’m not a con man but a respected television personality.” Unlike 2020’s con man television personality, Lord is actually a sympathetic character. Pascal is a tremendously talented performer who has an incredible range in his performances. As someone who has watched The Mandalorian season finale, We Can Be Heroes, and Wonder Woman: 1984 back-to-back, I think it’s safe to say that Wonder Woman is Pedro Pascal's stand-out performance of the year.

Each wish comes with consequences. For Diana, Steve’s return drains her of her abilities; for Barabara, she loses her warmth and kindness, and for Maxwell Lord — he becomes more and more unhinged as he works to gain ultimate control. Barbara goes from a badass in high heels to a true apex predator towards the film's climax. But even her powers are no match for Wonder Woman’s determination to do right by the world (and her Gold Eagle Armor).

In the end, even Maxwell Lord learns the hard way that all wishes come with a price and that some cost more than he’s willing to sacrifice. In this case, his son supersedes all of his machinations for power. He chooses to revoke his wishes to save his son from going through the same cycle of trauma that he endured as a boy. 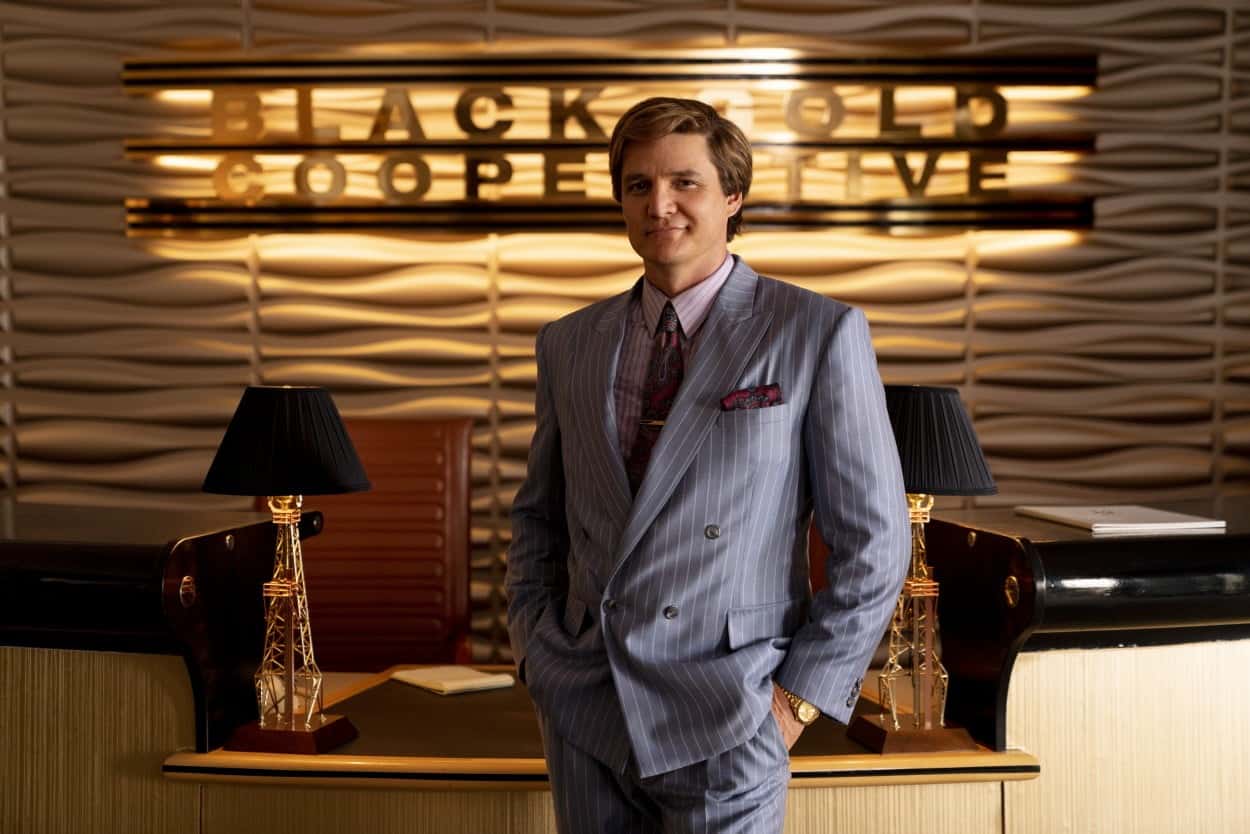 Wonder Woman: 1984 is a delightful romp through the eighties, complete with high stakes, crushing blows, and a stark dose of reality. While it may not match its predecessor with the same tone, it forges its own path forward with a similar core message. There will always be someone who has to sacrifice to save the day, but that is the cost of preserving truth, justice, and freedom.

Fitting for its Christmas release, the film draws to close in a Christmas market, where Diana has her own Hallmark movie moment. While Chris Pine and Gal Gadot light up the screen with their delightful chemistry, Wonder Woman: 1984’s stand-out performance goes to Pedro Pascal, who has to stop ripping my heart out in fatherly roles.

Though Steve Trevor may be gone (yet again), a piece of him lives on in Diana’s newfound ability to fly. A sweet ode to Trevor’s own natural gift as a pilot.

A future-focused blast from the past

8+Legit Ways to Watch Ads for Money (For Real)