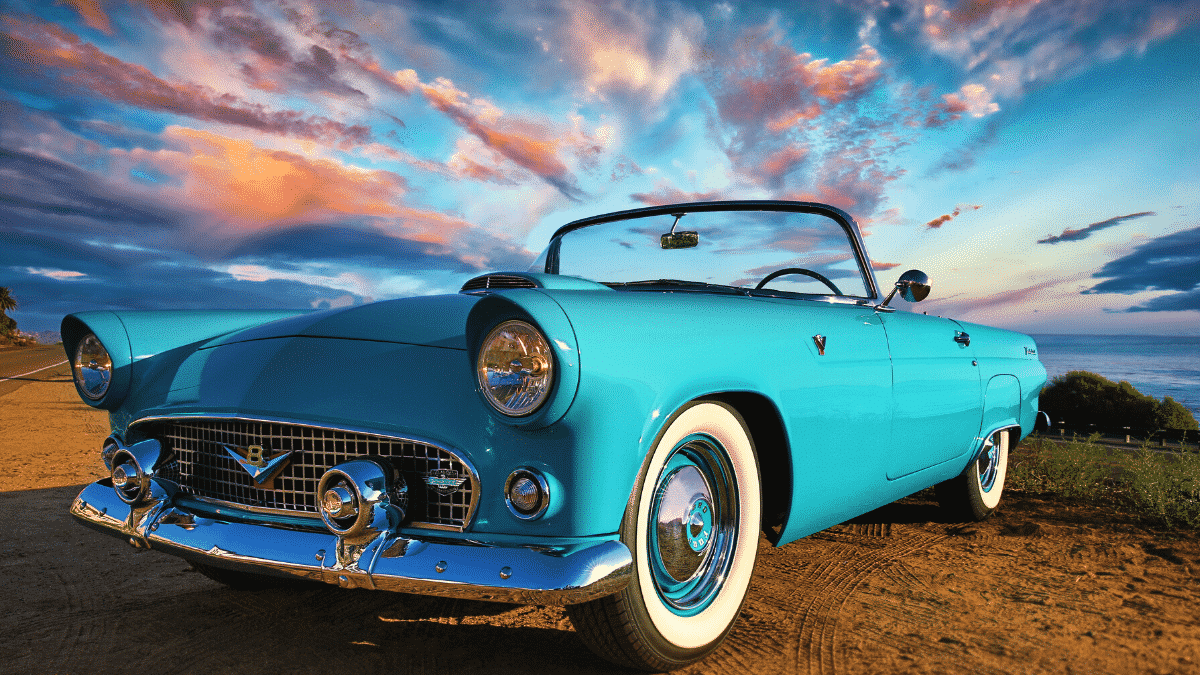 There doesn't seem to be a solid count of how many car models exist, yet one could hypothesize it's a lot. So it's not surprising we've seen several disasters hit the open road throughout the past several decades.

And since you can't have the sweet without the sour, one can't expect that the auto industry will get it right every time. But sometimes, things go very, very wrong.

See which cars made car experts, Edmunds.com's list of the 30 Worst Cars All Time.

Manufactured by Global Electric Motorcars (GEM), this “car” was essentially a 2-passenger road-legal electric golf cart. Also available in four and six-seater models, they're classified as low-speed electric vehicles (LSV.) And while technically they are faster than most other golf carts, your speed will max out at 25mph.

Inspired by Giovanni Michelotti, this car was a four-seat open-top that gave drivers the option to drive with no top, a cloth top, or a removable hardtop. Known for its multitude of design flaws, it was unreliable (at best), with only 3,000 of the 25,877 made sold in the US.

Touted as the first post-war sports car, the Crosley Hotshot was displayed at Macy's in NYC in 1949. The Hotshot had a removable top, side curtains, side panels instead of door, and few interior options.

Initially created to gain a share of the subcompact market, Cricket sales paled compared to its main competitors, the Ford Pinto and Chevy Vega. After two years of production and only 27,682 units sold, Plymouth laid the Cricket to rest. 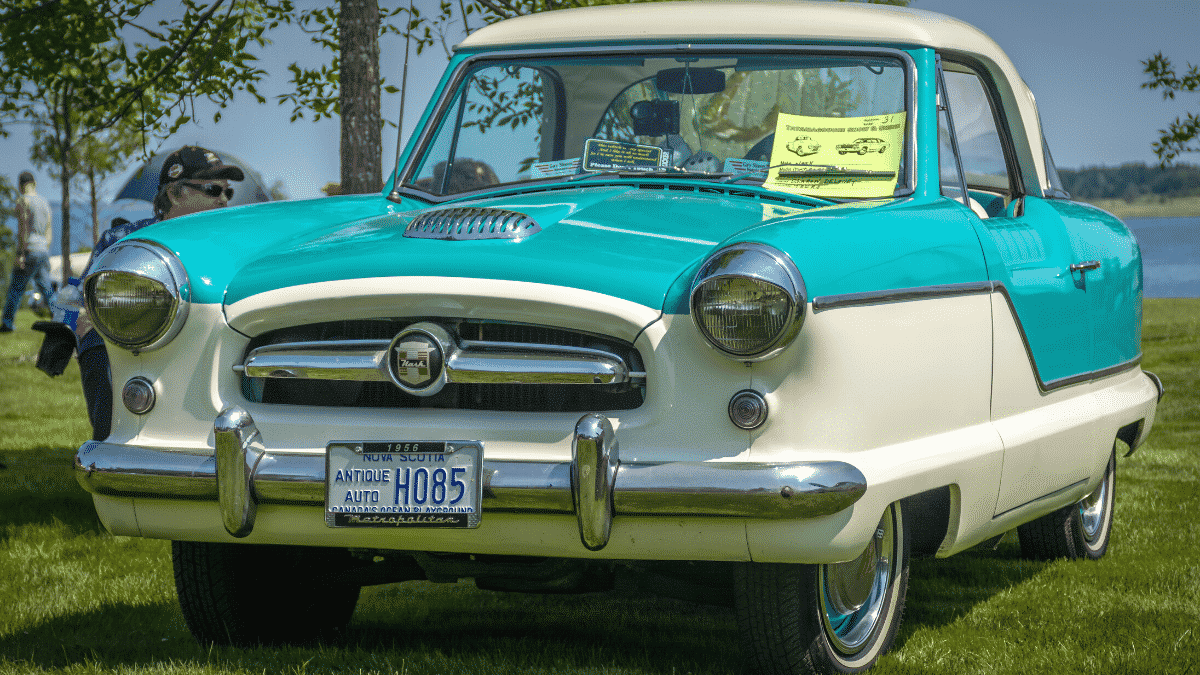 Measuring 11 inches shorter than the Volkwagon Beetle, it was juxtaposed with its larger competitors as the first subcompact car in America.

Manufactured by Nash Motor Corporation, the Metropolitan boasted speeds of 0-60 in a scant 22.4 seconds and remained in production for ten years.

In an attempt to scale back in size, Ford prettied up a Granada and crowned it “compact luxury.”

They also prettied up the price and sold the Versailles for more than double the cost of the Granada and managed to sell only around 15,000 in its first year on the market. 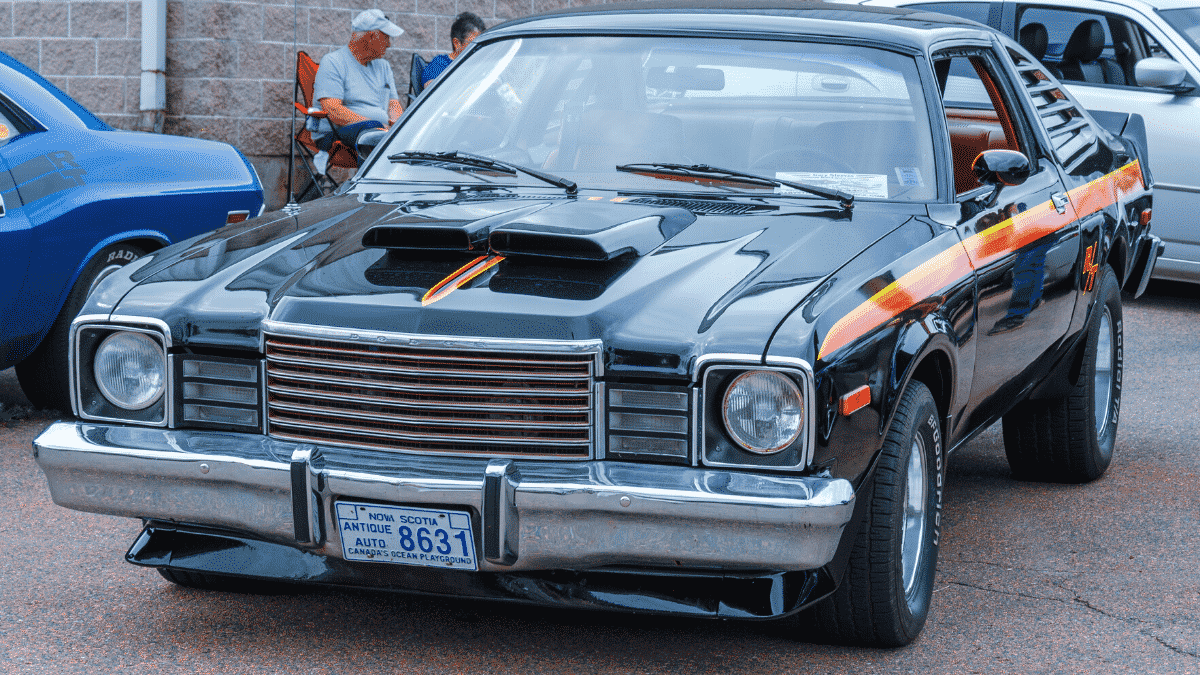 Earning the prestigious titles of MotorTrend's Car of the Year in 1976, the Aspen and Volare were Chrysler's attempts at a more compact model that fit the times.

After coming onto the scene strong, with sales reaching 500,000 in 1976, issues began popping up. Unfortunately, this pattern continued until the Aspen/Volare claimed a new title – the most recalled car in history.

Chevy's V6 midsize hatchback only stuck around for a year, whether due to the low-quality interior or lack of options. It did, however, boast spacious legroom, adjustable rear seats, two skylights, ample cargo space, and the ability to go from 0-60mph in 6.9 seconds.

Whether sitting in the front or the back, you'd probably feel cramped in Infiniti's M30 Convertible. A close cousin of the Nissan Maxima, the M30 shared many features yet seemingly fell short in comfort and ride quality.

The reception for Ford's 3rd generation Taurus was so bad that manufacturers decided to release a second base model halfway through the year. Although trunk space seemed to shrink from the previous models, cabin space was ample. Unfortunately, none of the Taurus' positive attributes outweighed its “sad” appearance.

Unlike its GM counterparts, the Cadillac Allante was in a class of its own, literally speaking, as it didn't share characteristics with any other car on the assembly line.

With a body manufactured overseas, a V-8 engine, and the goal of giving the Mercedes 560-SL a run for its money, the Allante was overpriced and pulled from GM's lineup after producing only 20,000 vehicles. 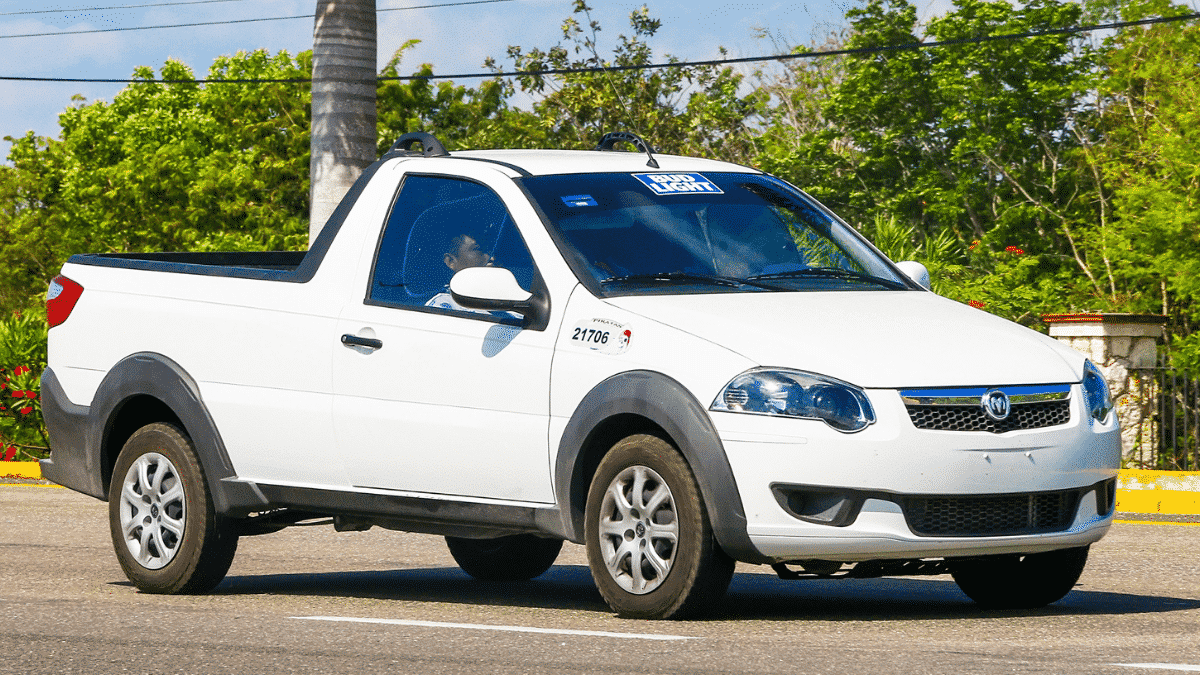 Called the Strada in the US, UK, Canada, and the Ritmo everywhere else. Small and boxy in appearance, the Strada was a less expensive option than other comparable vehicles of its time and the first vehicle to be built mainly by robots. Unfortunately, it failed to gain much popularity in countries other than Italy and Spain.

American Motors Corppopration's Pacer was on-trend with the automobile industry's push to provide the market with more fuel-efficient vehicles. It was received as innovative, reliable, and bore a slight resemblance to the VW Beetle – and not in a good way.

Its unique design made it challenging for the manufacturer to offer variants. Unfortunately, the car was too heavy for its brake system and lacked fuel efficiency. 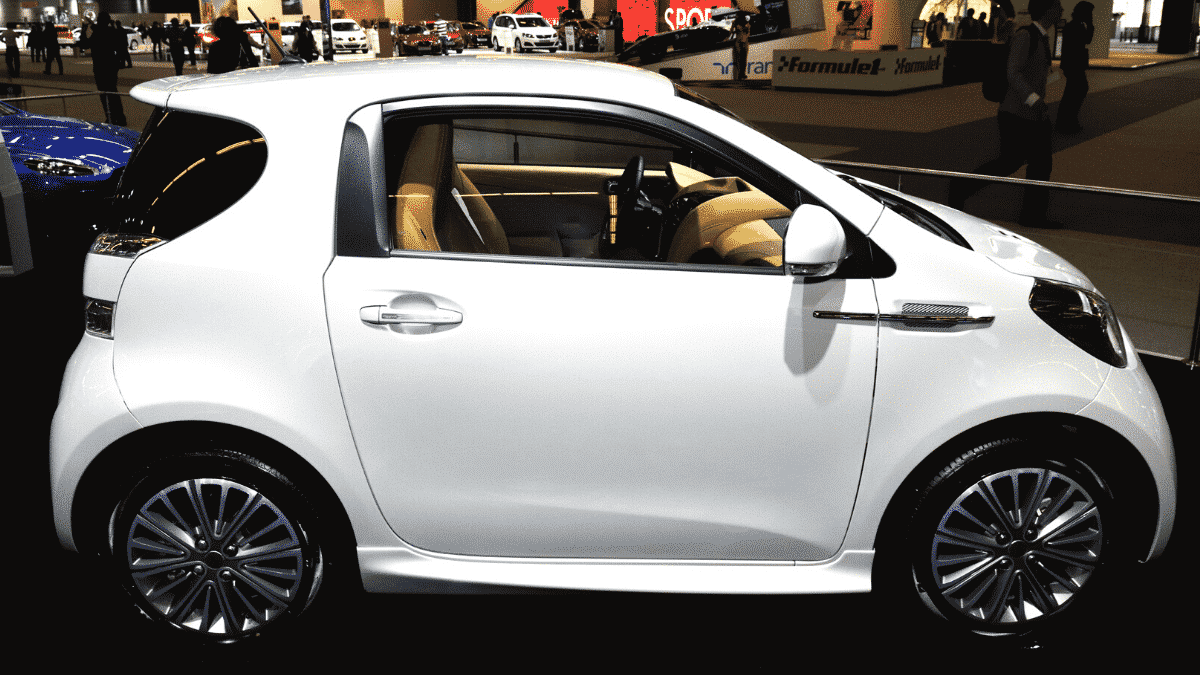 Marketed as a “city car,” the Cygnet held the title of the smallest vehicle in the Aston Martin lineup. While it possessed many of the high-quality features you'd expect from an Aston Martin, like the paint job and interior finishes yet lacked space, speed, and size.

Fuego means “fire” in Spanish. Unfortunately, this 2-door sport compact model, produced in France and Spain, lacked speed, handling, and a sound brake system. After earning a reputation of being unreliable, the Fuego's popularity quickly faded.

The Pinto was Ford's attempt to compete with smaller, economic import models. Unfortunately, the fuel tank lived behind the rear bumper, which led to the vehicle bursting in flames in multiple instances. ‘Nuff said.

Short for “Turbo Convertible,” the Chrysler TC was a two-seat convertible built in Italy. Yet to the consumer, the TC was simply an over-priced LeBaron that only stuck around for three years and sold 7,000 units. 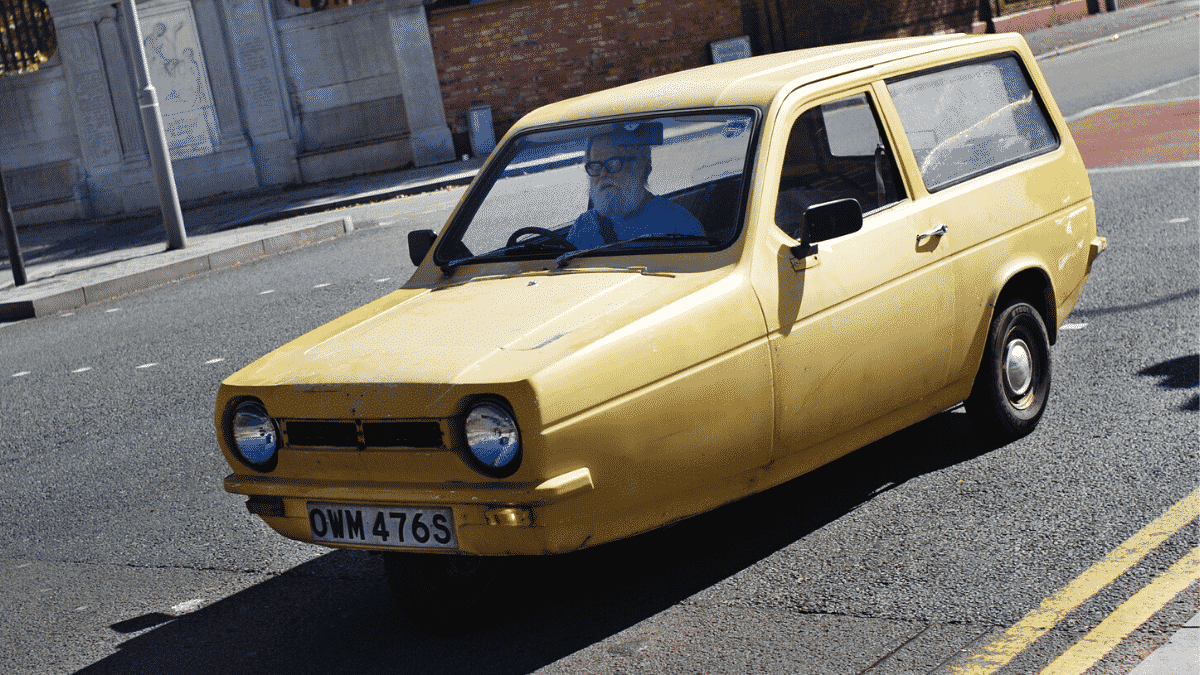 A glorified tricycle with a motor, the three-wheeled, fiberglass Reliant Robin would reportedly tip on its side when attempting a hard turn and struggle to accelerate.

Robin's classification seemed unclear. Was it a car? A plane? Or maybe a motorcycle? Regardless, this strange contraption miraculously remained in production until the early 2000s.

In the early eighties, gas prices ran high when another AMC disaster made its way on the scene. While it did well in the initial rounds of testing, its speed wasn't up to par. It took almost a full 15 seconds to reach 60mph on the manual model – the automatic model was even worse.

The Series D was Chevy's first attempt at a V8 engine. Unfortunately, After producing only 4,000 units over two years, it seemed the writing on the wall was clear. Production ceased when Chevy joined General Motors and decided this powerful model had no place in the lineup.

Oldsmobile hoped its Cutlass Supreme diesel model would offer its customers a solution to the energy problems and tightening regulations of the late 1970s.

The Cutlass had spent much of the 70s and 80s at the top of the best-sellers list, yet the Cutlass Supreme diesel engine had a long list of performance issues. Eventually, the company made cost-cutting design flaws which led to internal damage, system failures, and an irreparable reputation. 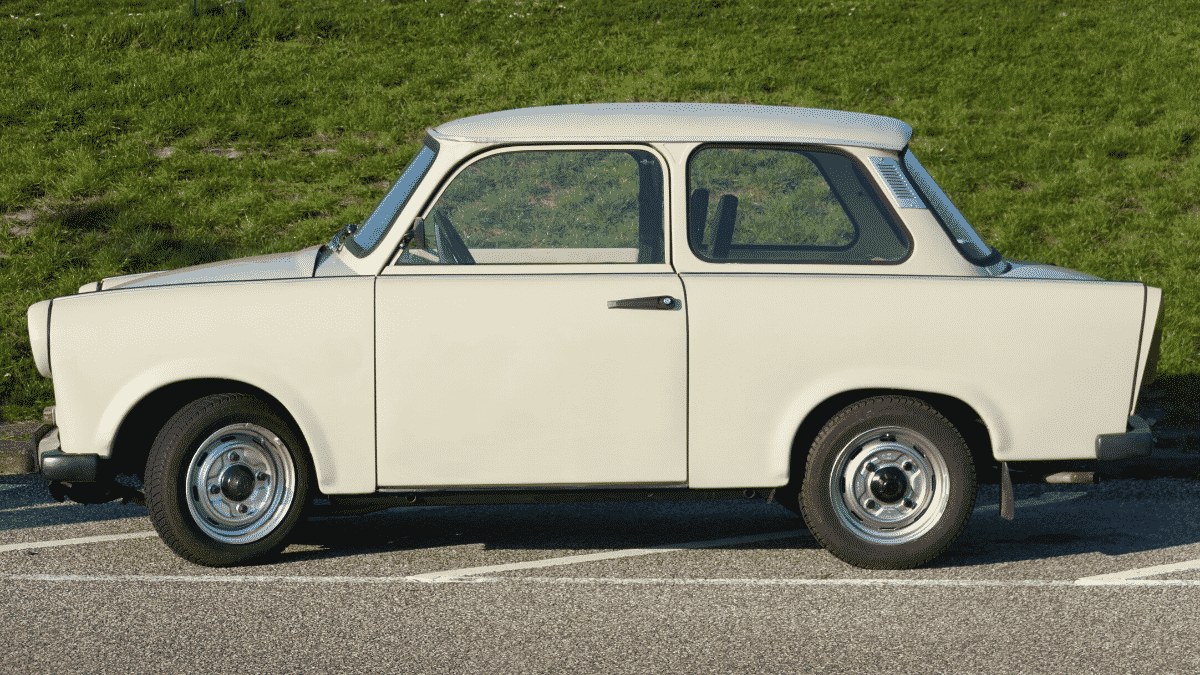 The Gerrman-manufactured Trabant – produced from 1957 to 1962 – was a small passenger car made with a plastic body from a material called Duroplast and required 180 hours of assembly. Other issues: it was expensive, struggled to make it past 60mph, and basic (and essential features) such as seatbelts and turn signals.

Tagged as “one of the worst cars ever,” the Cimarron was intended to be an entry-level luxury compact car. Instead, this 4-cylinder embarrassment was of poor quality and way overpriced.

Yet even the large array of options wasn't enough to change the public's opinion that Ford had overpromised and underdelivered. Deemed an ugly, overpriced flop, after only two years, Ford halted production.

The Saturn Ion's claim to fame was a high transmission failure rate that warranted a class-action lawsuit filed against the GM company. And if that weren't enough, the 2003 model also prompted one of the most significant automobiles recalls in history for its ignition switch issue that resulted in 13 deaths.

The market had high hopes for the Chevy Vega, GM was confident of its potential, and it even won Motor Trend's Car of the Year in 1971. The Vega, however, quickly crashed and burned (pun intended) as it experienced engine and rust problems, design issues, and eventually, massive recalls.

Even after Chevrolet increased its quality control efforts (later reduced due to a labor strike), engine problems persisted, leading to the Vega's last production run in 1977. 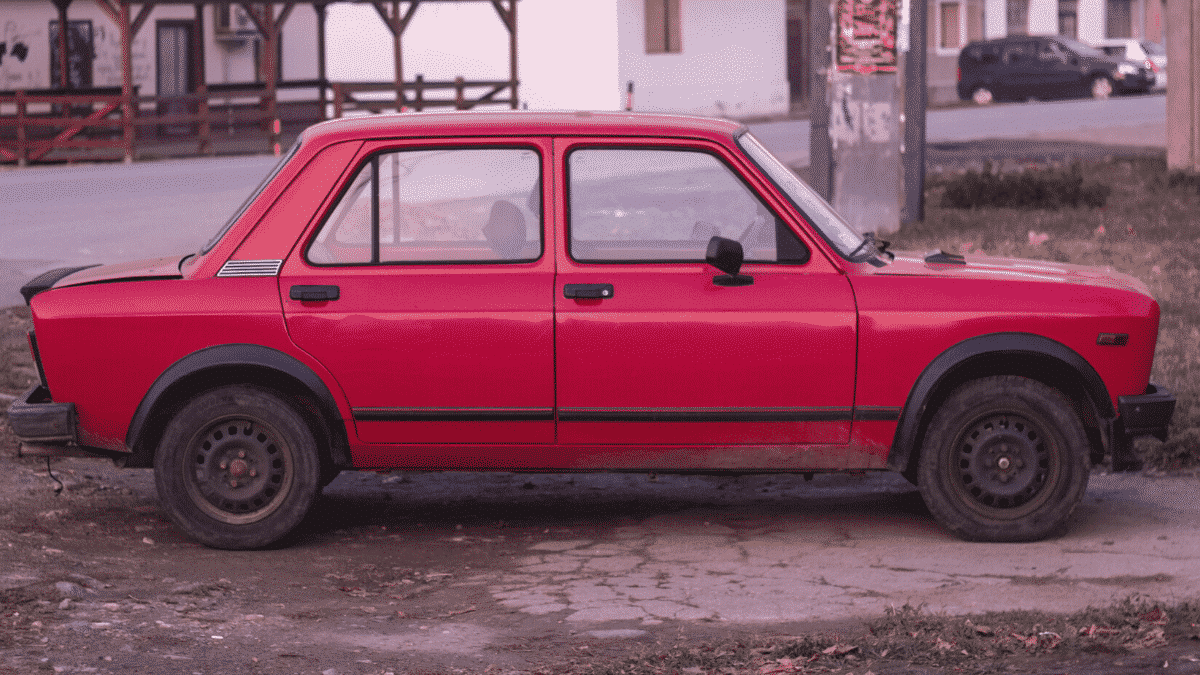 This Yugoslavian-made hatchback burst onto the US market in 1985, intending to be the cheapest car in the country. Despite its warm welcome, the Yugo quickly became the butt of the jokes with its slow speeds, poor crash test ratings, and shoddy construction.

Often referred to as the “bubble car,” this microcar's engine sat in the back end atop its third wheel and had a singular door that opened from the vehicle's front end.

Other quirky features included no reverse gear (um, what?!) and a sunroof made of fabric that served as an escape hatch. Not to mention, drivers needed only to possess a motorcycle license to operate the Isetta legally.

Nevertheless, the model was a glorified shoebox, and unsurprisingly the appeal wore off as the public once again sought out full-sized vehicles.

Mustang lovers are in a class of their own, yet even they weren't huge fans of its second edition. For its 2nd debut, the Mustang was nipped and tucked and based on a subcompact Pinto. But maintaining the smaller size also required a smaller engine that many people felt didn't live up to the “sports car hype.”

However, it managed to serve an unintended purpose as it was born in an era when Americans wanted more compact and efficient vehicles. Unfortunately, the Mustang II no longer served a purpose once the energy crisis subsided.

Believe it or not, this gem appears on multiple “Worst Car” lists, so you know it deserves this honor. But, sadly, the Aztek isn't only aesthetically displeasing; it's the antithesis of sleek and dynamic.

Often cited as its final mistake, Pontiac's minivan-esque frankencar's most significant achievement was its starring role as the meth-mobile in Breaking Bad more than a decade after production ceased.

It's no secret that car enthusiasts tend to bear strong opinions on what does and does not make a good car. And while the failures continue beyond this list of the worst cars, the list of great, dependable vehicles is long, and the good far exceeds the bad.

Kristin Stones is the founder of Cents + Purpose, an online community dedicated to sharing practical personal finance content. Her mission is to equip women with the necessary tools and knowledge to take back control of their money and live a more purposeful life. She creates actionable content to help her audience achieve financial wellness using her simple approach to managing money - all learned through her personal experience of paying off almost $55,000 of debt in under two years.

‘Obi-wan Kenobi’ Cast and Director Reveal Details From the Series