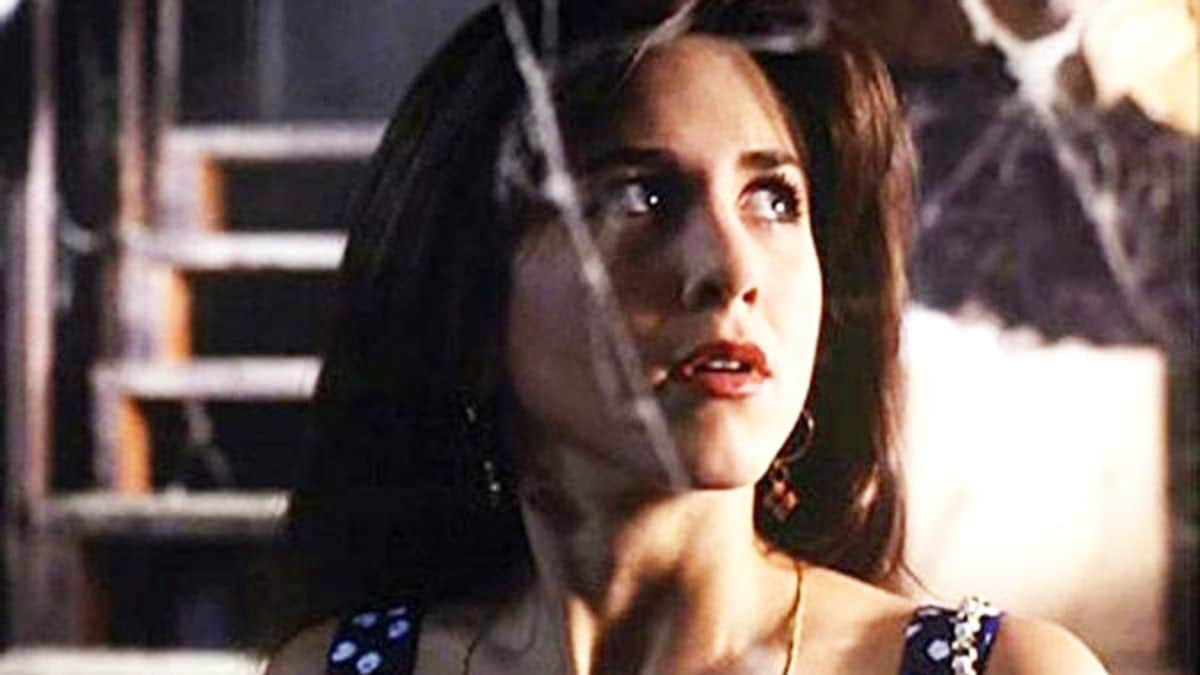 Horror is a movie genre that provides a very mixed bag in terms of quality. There have been some bona fide masterpieces in the genre, such as The Birds, The Exorcist, and Hereditary, but they're certainly few and far between.

13 Horror Movies That Are So Bad They're Good

More often than not, horror movies aren't great, with some being outright horrendous (and not in the way intended), and those are the kind of titles we'll be dealing with in this piece.

Just in time for Halloween, if you're looking for something terrible to watch, these are the 13 worst horror movies we love to hate.

A loose remake of the 1953 film of the same name (which was itself a remake of the 1933 film Mystery of the Wax Museum), House of Wax is a slasher movie to avoid. It's about a group of teenagers who find themselves stranded near a strange wax museum in Ambrose, Louisiana. They must fight to survive and prevent themselves from becoming the museum's next exhibit.

Any movie in which Paris Hilton plays one of the main characters isn't going to be great – and this movie is far from that. Hilton won the Razzie for Worst Supporting Actress for her performance, and the other cast members weren't much better than her. House of Wax is formulaic, forgettable, and poorly acted. It also has one of the most ludicrously over-elaborate finales ever filmed.

You can watch House of Wax on Amazon and HBO Max.

Plan 9 from Outer Space is a black-and-white sci-fi horror. It's about aliens who want to prevent humanity from creating a doomsday weapon with the potential to destroy the universe. The extraterrestrials implement “Plan 9” – a scheme to resurrect the Earth's dead, referred to in the movie as “ghouls.”

Often described as one of the worst horror movies ever made, Plan 9 from Outer Space is genuinely awful. The acting is horrendous, it's lazily written, it has multiple continuity problems, many of the props look fake, and it's not even moderately scary (it is, in fact, quite funny). It's a terrible endorsement of Ed Wood as a director.

You can watch Plan 9 from Outer Space on Amazon.

The Incredibly Strange Creatures Who Stopped Living and Became Mixed-Up Zombies is a monster movie in which three friends visit a carnival and stumble onto a group of occultists and disfigured creatures. Steckler also starred in the film and was credited using the pseudonym “Cash Flagg.”

Many people consider this to be the outright poorest movie ever made – and with good reason. The acting is atrocious, the dialogue is laughable, and the plot is insultingly simple and threadbare. It has become a cult classic and has a haunting aesthetic, but that doesn't make up for the fact that it's complete garbage on the whole.

FeardotCom is a supernatural horror movie about a New York City detective (played by Stephen Dorff) who investigates a spate of mysterious deaths connected to a disturbing website. It transpires that people who visit the website die within 48 hours, and the thing that kills them is what they fear most.

This movie steals ideas from better movies like 1983's Videodrome, 1998's Ringu, and 2001's Kairo. The result is an incoherent mess that barely has any scary scenes. What was potentially a fresh idea ends up being predictable and derivative. The screenplay and acting are poor, and some imagery is borderline offensive. The one good thing about it is that it looks pretty stylish.

You can watch FeardotCom on Amazon.

Manos: The Hands of Fate is a horror movie about a vacationing family who become lost on a road trip. Following a long drive through the Texas desert, they find themselves captive at a lodge maintained by a polygynous pagan cult led by a man called The Master. They must then attempt to escape.

A desperately inexperienced crew made this movie with a near-zero budget, and it shows. It feels very experimental, but it's safe to say the experiment emphatically failed. It fails at being scary in the most extreme way, as you'll find it hard not to laugh at its constant ridiculousness. It now has a cult following because of how bad it is.

You can watch Manos: The Hands of Fate on Amazon.

The Swarm is a natural horror movie based on Arthur Herzog's 1974 novel of the same name. The film sees a scientist and a group of soldiers preventing an inconceivably large swarm of killer bees from invading Houston, Texas. It has an ensemble cast that includes Michael Caine, Katharine Ross, Slim Pickens, and Henry Fonda.

It's as bad as it sounds. Bees aren't scary, no matter how they get depicted, so there's nothing to keep you on the edge of your seat. The big stars in The Swarm look disinterested (understandably), and the special effects and big set pieces look lame. It's one of the most flaccid horror movies you could imagine.

You can watch The Swarm on Amazon.

Hobgoblins is a low-budget independent comedy horror about small mythical demonic creatures. In the movie, a young security guard must track the hobgoblins down as they rampantly kill people after using hypnotic powers to make their fantasies come true.

If you think that sounds like the plot of a messy movie, you'd be right. The acting is poor from an unknown cast, while the titular creatures are so cheap looking it's laughable. It's a rip-off of every diminutive monster movie, especially Gremlins and Critters, and it has a cult following due to its inferior quality.

You can watch Hobgoblins on Amazon.

Although Leprechaun spawned a successful franchise (the most recent installment being 2018's Leprechaun Returns), it's pretty darn awful. The comedy horror sees Warwick Davis playing a vengeful leprechaun who believes a family has stolen his pot of gold. As he hunts them down, they try to find his gold to appease him.

Leprechaun marks Jennifer Aniston's movie debut, but that doesn't save it. It's one big awful cliché. The acting is abysmal, and the entire production looks very cheap and lacks anything resembling terror or suspense. Davis is the closest thing to being entertaining, but he isn't scary, and the movie's humor is mainly ill-advised and borderline inappropriate slapstick.

You can watch Leprechaun on Amazon.

The marketing for Troll 2 presented it as a sequel to 1986's Troll, but it has no connection to it at all. It also features goblins, not trolls. Not a good start, right? The plot of this comedy horror sees vegetarian goblins chasing a family because they want to transform them into plants so that they can eat them.

It sounds ridiculous, and it is. It's hard to express just how awful this movie is. It looks cheap, and the acting and dialogue are so campy that it's farcical. One of the movie's actors, Don Packard, was a patient at a nearby mental hospital who was cast for his role while on a day trip. He smoked a lot of marijuana before filming, and his disturbing performance isn't acting.

You can watch Troll 2 on Amazon.

Birdemic: Shock and Terror is an independent movie that's a romantic thriller-horror. It's heavily inspired by Alfred Hitchcock's The Birds and chronicles a romance between the two main characters while their small town gets attacked by birds. The environmental documentary An Inconvenient Truth was also an inspiration for it, which led to the movie having an ecological message.

This movie is utter nonsense. The plot is horrendous, the acting is wooden, the CGI is appalling, the sound and editing are amateurish, and it takes 47 minutes before the birds even appear. Birdemic: Shock and Terror truly has absolutely no redeeming qualities.

You can watch Birdemic: Shock and Terror on Amazon.

1984's A Nightmare on Elm Street is a horror classic, but the 2010 remake is far from it. It takes place in the fictional town of Springwood, Ohio, and follows a group of teenagers living on Elm Street who get stalked and murdered in their dreams by a disfigured man named Freddy Krueger. The teens discover they have something in common that links them to him.

This movie lives up to its name in the worst way possible. It's dull, lifeless, and lethargic, with completely unmemorable characters. It lacks everything that made the original so great. Jackie Earle Haley plays a creepy Freddy, but he's relatively forgettable on the whole and not a patch on Robert Englund. Incidentally, Englund has stated he dislikes this movie too.

You can watch A Nightmare on Elm Street on Amazon.

Another remake now – and this time, it's a remake of a movie that wasn't very good in the first place: 1979's The Amityville Horror, a film adapted from the 1977 novel of the same name. The movie documents the experiences of the Lutz family after they move into a haunted house at 112 Ocean Avenue, Long Island, New York.

This movie has an all-star cast of Ryan Reynolds, Melissa George, and Philip Baker Hall. Reynolds, however, is badly miscast. It has a somewhat creepy tone but absolutely no major scares. It's cheesy and far too busy, confirming the notion that what you don't see in a horror movie makes it scary. Here, you see too much, and it just feels silly.

You can watch The Amityville Horror on Amazon.

Jason X is a sci-fi slasher and the tenth installment in the Friday the 13th franchise. The franchise worsened after the opening installments, and this one takes it to a new low. Set in the future, it sees Jason Voorhees having been in cryogenic stasis for 455 years. He awakens in 2455 on a spaceship after being found by a group of students. He subsequently stalks and kills them one by one.

This movie knows it's terrible and pokes fun at itself, which is admirable, but it doesn't change the fact that it's awful. It's just like any other bad Friday the 13th movie, only in a new setting, which fails to disguise its flaws. It's predictable, far more laughable than terrifying, the acting is poor, and the special effects are terrible. It has no real reason to exist.

You can watch Jason X on Amazon and HBO Max.

READ MORE: 10 Best Mystery Movies of the 90s: ‘Silence of the Lambs' and More

The Greatest Thor Villains of All Time