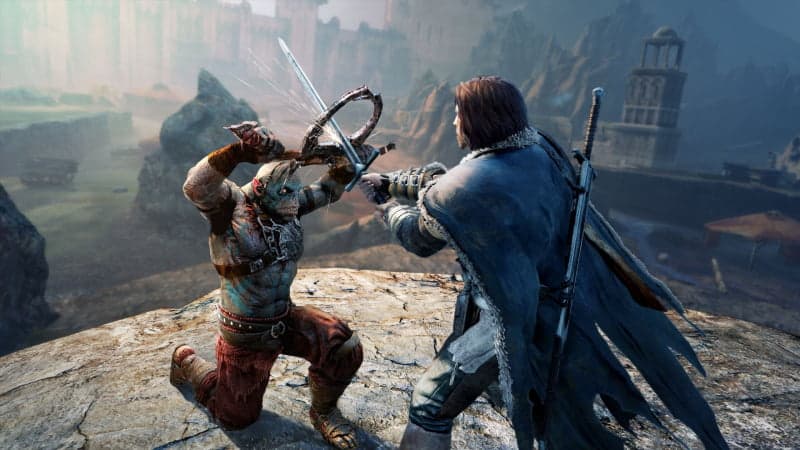 With 2021 marking the 20-year anniversary of The Lord of the Rings: The Fellowship of the Ring film (oh no, we're old!), we've decided to take a look at some of the best video games from that universe. Oddly enough, there aren't many — and even fewer of them are actually worth playing. That isn't unusual for licensed games based on existing IP. Up until recently, it was standard to get lots of video games based on existing franchises that were duds.

Sometimes you'd get a banger like The Lord Of The Rings: The Return Of The King (based on the third film of the trilogy), but for every great game, it seems like two or three mediocre ones followed. Either way, there are still quite a few The Lord of the Rings games you should check out. These are the 10 best games in The Lord of the Rings universe.

The 10 Best The Lord of the Rings Video Games 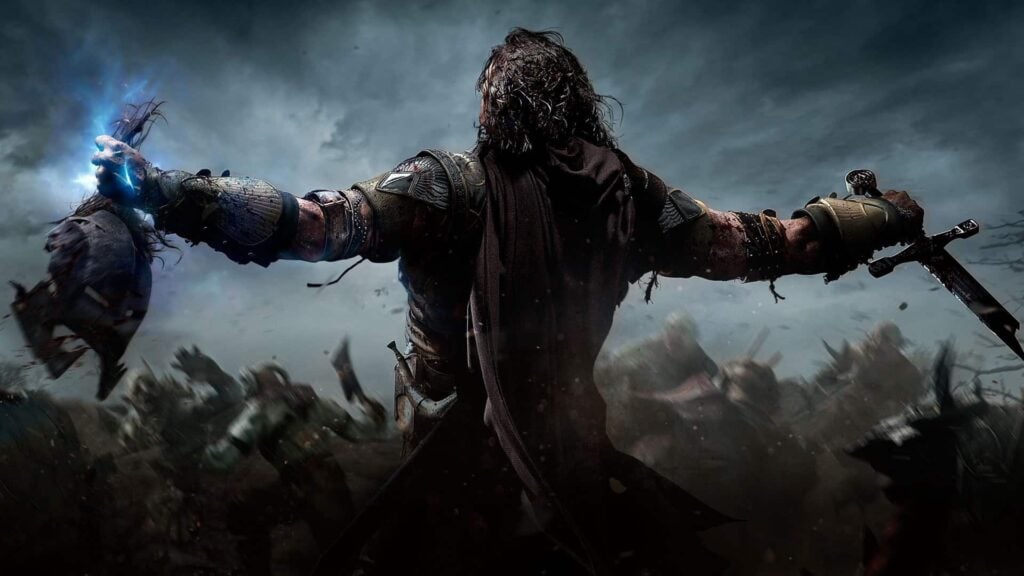 Let's start off with one of the most recent entries, Middle-earth: Shadow of Mordor. Arguably one of the best games set in the Tolkien universe, Shadow of Mordor is an action-adventure with RPG elements. It played a lot like Assassin's Creed, only it was darker and more fantasy-driven, as you'd expect. It takes place between the events of The Hobbit and The Lord of the Rings, putting you in the shoes of Talion, a Ranger on a quest for revenge.

The most memorable part of this game was its Nemesis system. This mechanic allowed the game's enemies to remember battles you've had with them, prompting them to act accordingly if you come across them later on. You can also summon certain enemies into your own army and use them to take down Sauron's goons. It was a neat game with new ideas, and we're glad it spawned a sequel.

The Lord of the Rings Online 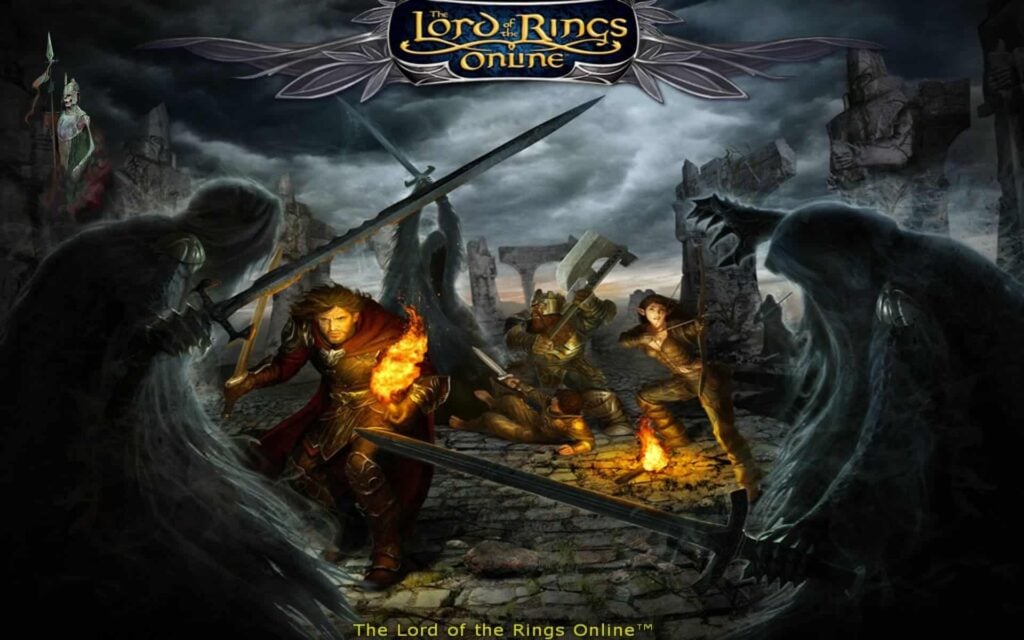 It makes sense for one of the biggest fantasy franchises to get its own MMORPG (massively multiplayer online role-playing game), and that's exactly what we got with The Lord Of The Rings Online. While this game was certainly no World of Warcraft killer, it was positively received and still has an audience to this day.

In fact, even though it released in 2007, developer Standing Stone Games is still releasing expansions for it, with one planned to launch later this year. It takes place during the events of The Lord of the Rings films, and allows you to create your own character to level them up as you interact with other players and complete quests.

The Lord of the Rings: The Return of the King 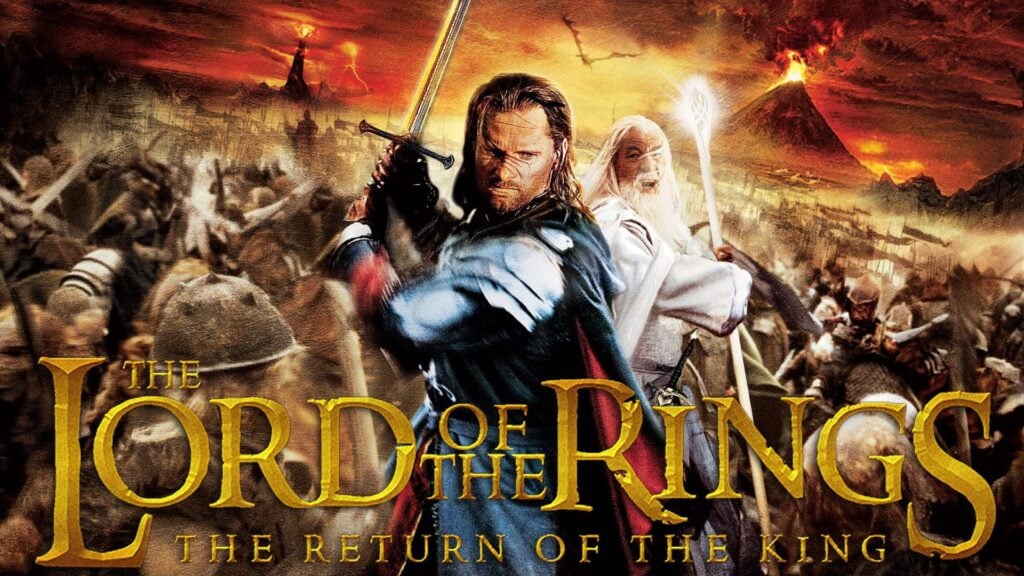 The Lord Of The Rings: The Return Of The King is the video game adaptation of the 2003 film of the same name and it's surprisingly good. It's a hack ‘n slash action-adventure game that follows the events of the film, allowing you to play as multiple characters and featuring various branching paths. EA Redwood Shores worked closely with the filmmakers and even used assets from the film to help with the production of the game.

The Return Of The King has light RPG elements, with an experience point system that can be used to upgrade your characters. While this game played similarly to its predecessor, The Two Towers, it differs in that it features more interactable environments, such as the ability to interact with bridges and catapults.

Lego The Hobbit is, much like The Return Of The King, an adaptation of the films of the same name, only in Lego format. It's the video game adaptation of the first two Hobbit films, An Unexpected Journey and The Desolation of Smaug, and even features dialogue from the movie. The most fun part about the Lego games is trying out all the different characters, each with their own unique abilities — which is present in Lego The Hobbit. Sadly, a Lego game adaptation for the final part, The Battle of the Five Armies never saw the light of day, but at least you can play through the first two films of The Hobbit trilogy.

The Lord of the Rings: The Battle for Middle-earth 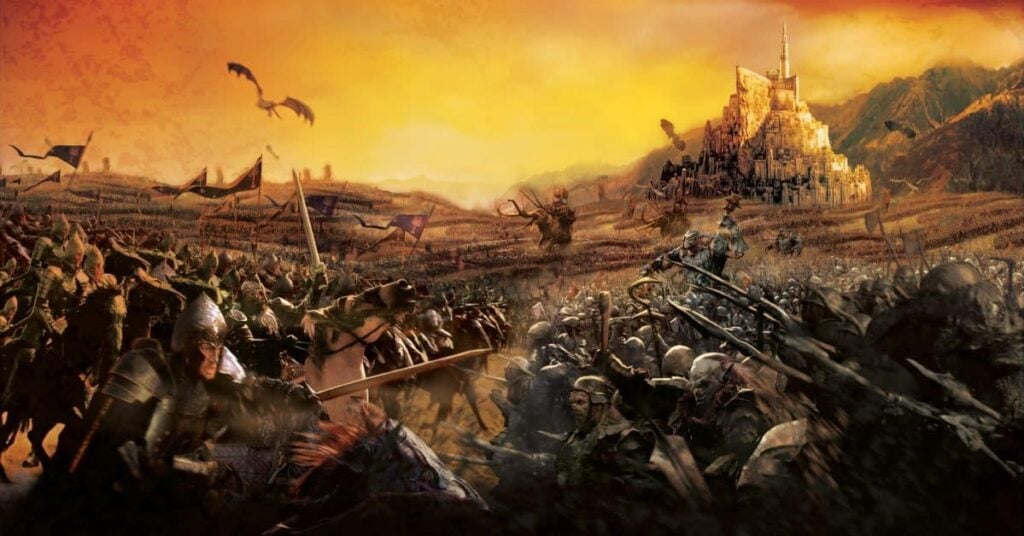 Real-time strategy games were never as popular as the action-adventures, but that doesn't mean you should skip The Lord Of The Rings: The Battle For Middle-Earth. This RTS is based on the Lord of the Rings film trilogy and even uses clips from the movies in-game. This game is deep, offering numerous factions, an interesting base-building mechanic, lots of resources to collect, and a rock-paper-scissors style battle system. Unfortunately, this game isn't as functional as it was when it launched due to the game servers being shuttered, but you can still play it offline.

The Lord of the Rings: The Two Towers 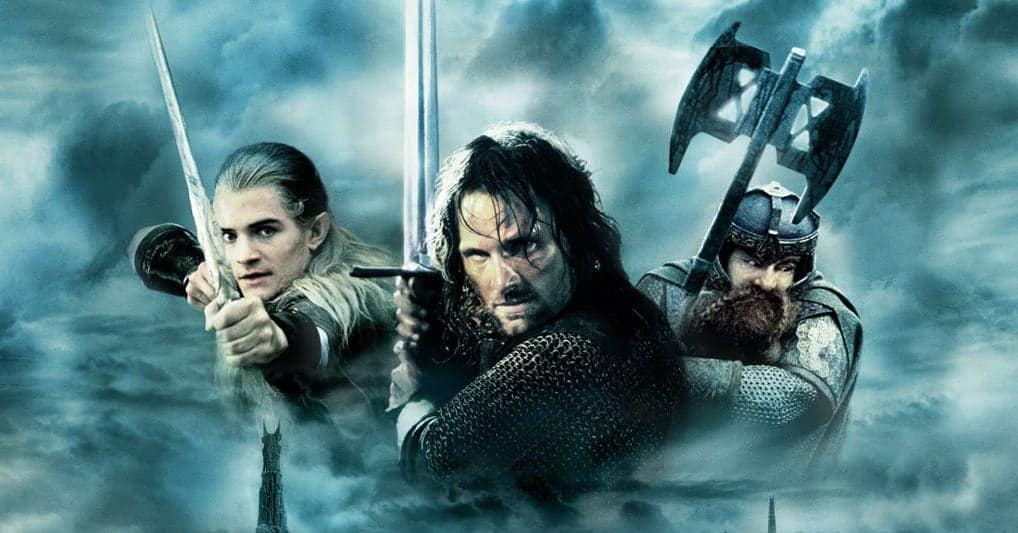 Serving as the video game adaptation of The Lord Of The Rings: The Two Towers film, this hack ‘n slash adventure is fondly remembered as a fantastic retelling of the events from the movie. It actually features scenes from the first film, The Fellowship of the Ring, as well, and is a faithful adaptation.

Similar to what we've discussed with The Return of the King, this game has action combat, multiple playable characters (including Aragorn, Gimli and Legolas), along with detailed levels to explore. It also utilizes an upgrade system that allows you to enhance the characters as you play. Most players prefer The Return of the King over The Two Towers, but they're both good and are examples of movie video game tie-ins done right.

The Lord of the Rings: The Third Age 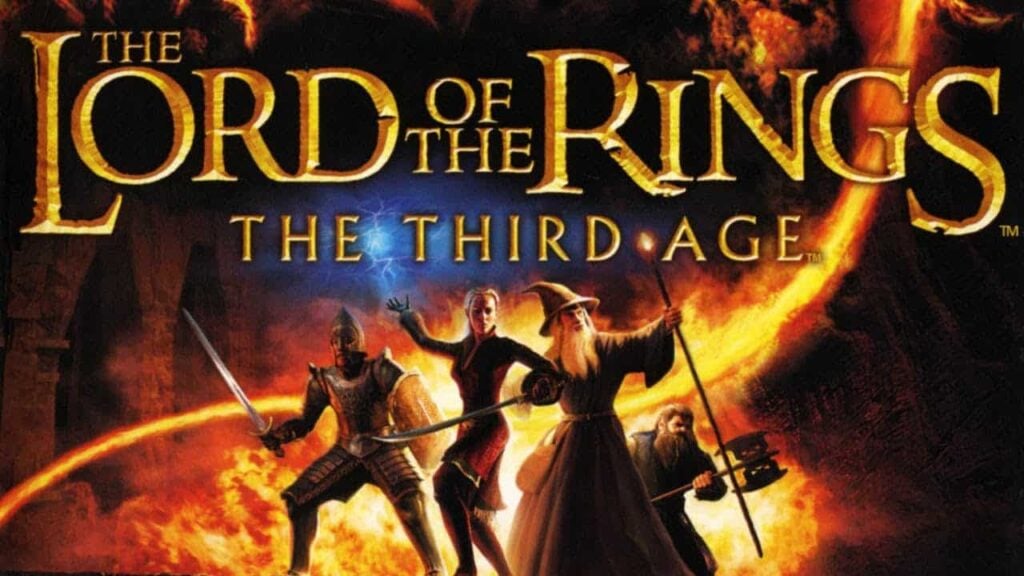 While the film adaptations we've mentioned above fall into the action category, The Lord of the Rings: The Third Age is a full-on RPG. It's loosely based on the Peter Jackson films, but doesn't follow as closely as The Two Towers and The Return of the King game adaptations. Still, it's got a fantastic turn-based combat system that you'll be familiar with if you've played the Final Fantasy games. In between battles, you explore an overworld from a third-person perspective, while making your way through the game's campaign. Players particularly enjoyed The Third Age's visuals and story, and is one of the best RPGs in the Tolkien universe.

Lego the Lord of the Rings 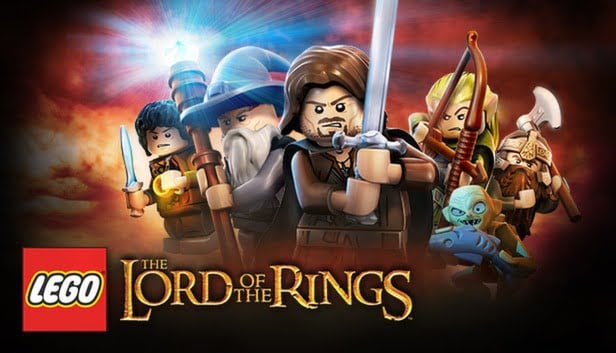 Once again, Lego The Lord of the Rings is a video game adaptation of the original Peter Jackson film trilogy, only it's slightly altered to be more family-friendly. It's a Lego game after all. Like Lego The Hobbit, this game utilizes voice work directly from the films and features lots of playable characters. In total, 80 different characters to choose from, so you'll want to give them all a try as you unlock them. The game also has 18 different levels that are based on the films, giving the player a variety of areas to explore. What's cool about this game is that it features two-player co-op, which is great for families, especially those with younger audiences.

The Lord of the Rings: The Battle for Middle-earth Ii 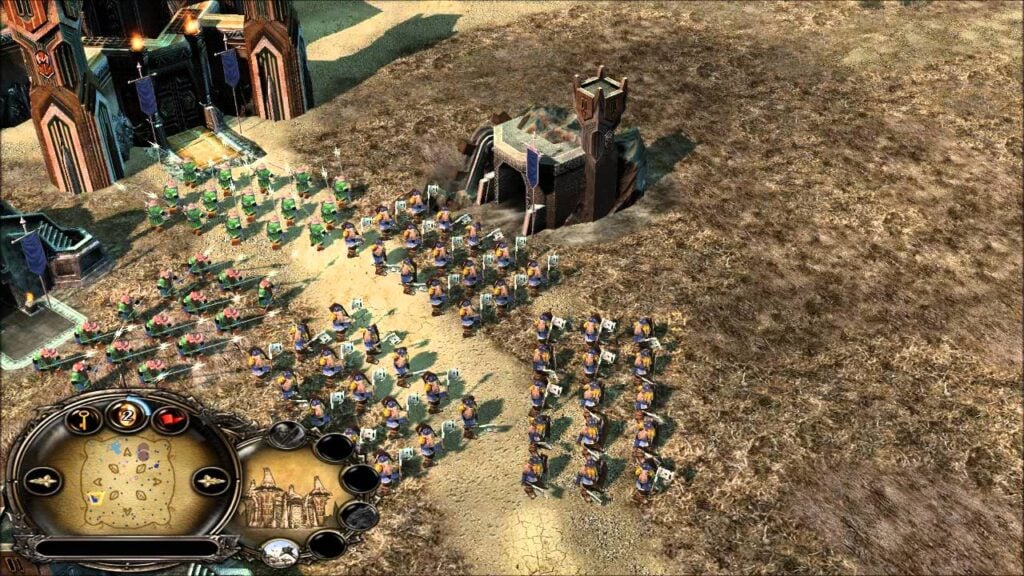 The Lord of the Rings: The Battle for Middle-earth II is basically a better version of the original RTS game, offering tweaks and quality of life improvements over the first entry. This game has a compelling good/evil campaign system, giving you lots of options for how you play the game and an incentive to try each path. Again, this entry features real-time strategy elements, wherein you must move your army around a large battlefield to take down Sauron's minions. As with the first game, the online servers were shut down, unfortunately, but you can still play using unofficial servers. 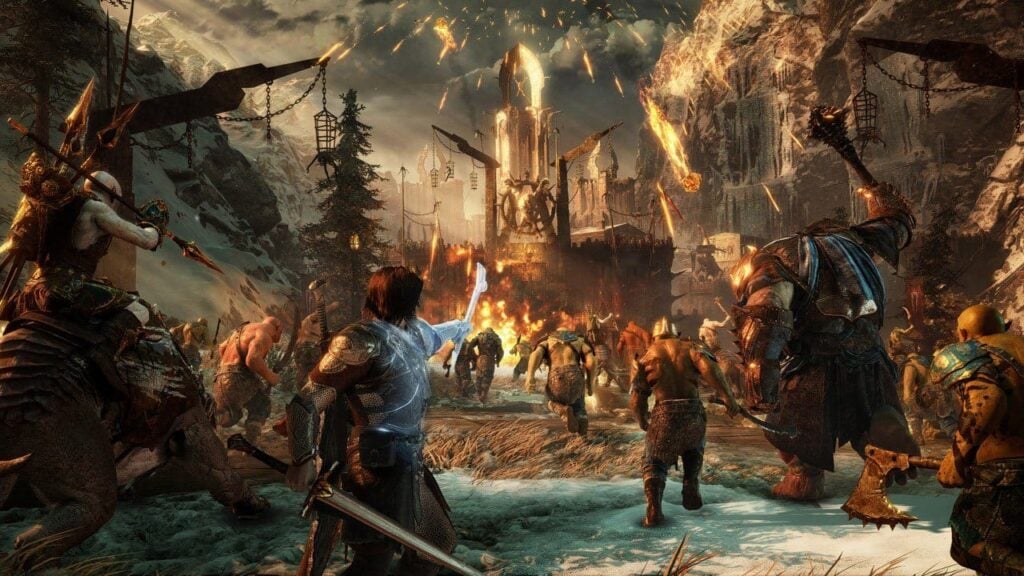 Let's end the list with Middle-earth: Shadow of War, the sequel to Shadow of Mordor. This game took the foundation set by the original installment, but expanded upon it, giving you a much more ambitious, large-scale adventure to enjoy. Since the developer, Monolith Productions already had the framework from the first game, it was free to make something bigger with Shadow of War. It includes the beloved Nemesis system from before, but also features an online Social Conquest mode, which allows players to invade one another's bases via the internet. Despite some criticism towards the game's paid microtransactions, Shadow of War is a worthy sequel and is one of the best games in The Lord of the Rings universe.

1031 Exchanges Explained: What This Tax Strategy Means for Investors