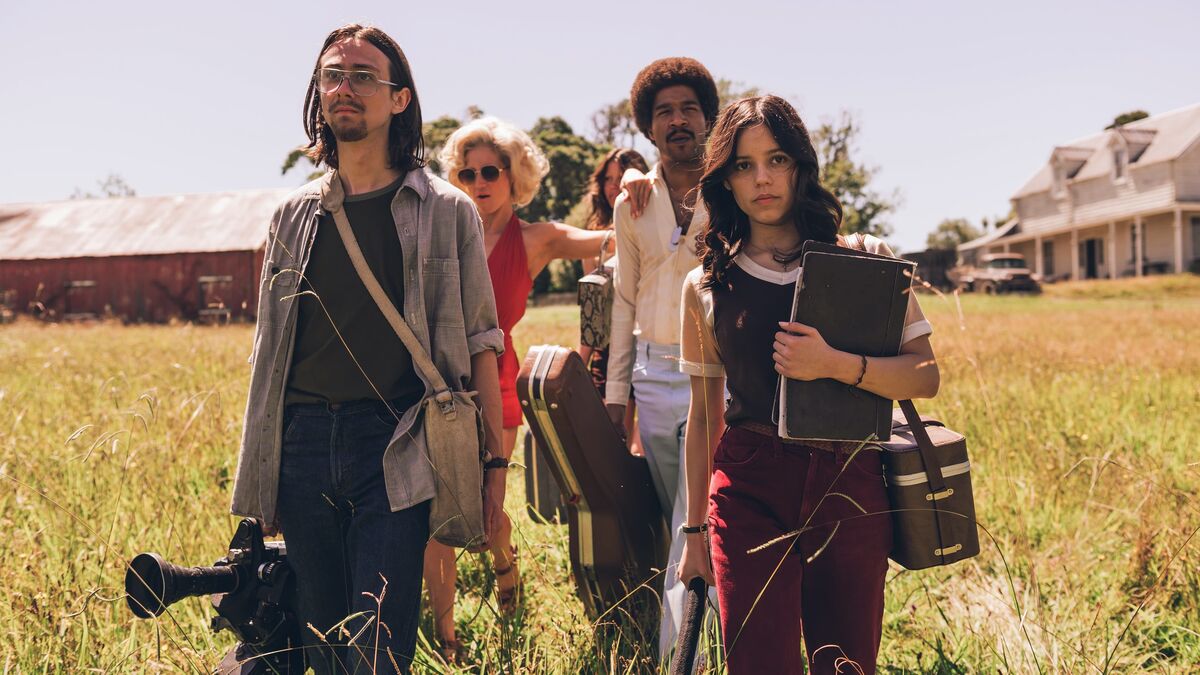 As characters frequently point out in Scream, the slasher genre is steeped in fairly ridiculous, idiotic and/or sexist stereotypes, with slasher films in general populated by sex-crazed, scantily-clad characters idiotically wandering around, asking “Who’s there?”

In a movie that’s made with the express purpose of scaring you, we can’t help but laugh at most slashers, shaking our heads at the characters’ complete lack of common sense whenever they investigate a slowly creaking door or descend into the dark basement. Very rarely does a slasher come along that we laugh with instead of laughing at—a movie that mocks these cheesy slasher conventions, subverts them, and in some cases knowingly uses them to its advantage in scaring the audience.

Ti West’s new slasher, X, is one such movie—a clever, well-made slasher that offers an engaging presentation of gender and an interesting exploration of a common theme you’ll find in most slashers: sex. That’s right—lots and lots of sex.

When Pearl happens upon the crew shooting part of their film, she realizes the true reason they’ve come to her farm. Jealous of their youthful appearances, physical beauty, and promiscuity (Pearl cannot have sex with Howard because of his ailing heart), she begins stalking the members of the film crew, brutally killing them off one by one.

X may be the first slasher in existence where the killers are horny old people. That may sound cheesy or straight-up ridiculous to say, but the movie does so with an unexpected amount of nuance, focusing heavily on Pearl’s character, as well as the reasoning behind her violent nature. Once a young woman of great beauty, Pearl—like Maxine—believed she was destined for great things. Marrying Howard, a veteran of both WW1 and WW2, she ended up settling down sooner than she had anticipated, with time passing far too quickly for her to be able to pursue her life’s ambitions and become a professional dancer.

Advanced age having robbed her of her physical beauty and natural talent, she is now embittered at her frail appearance and the fact that she never accomplished anything of merit in life—she’s only sat rotting in her Texan farmhouse, letting her appearance go to waste.

In spite of her age, Pearl desperately clings to the notion that she is still beautiful and “special,” which she frequently asks her husband to tell her she is. To prove to herself that she is still desirable, she regularly tries initiating sex with Howard, only for him to rebuff her because of his age. To satisfy his wife, the couple begins killing any lodgers that stay at their farm.

While seemingly obsessed with sex, Pearl’s crimes aren’t necessarily rooted in sexual desire—rather, it’s borne out of her narcissism and belief she’s as beautiful and special as someone like Maxine. The fact that she’s so drawn to Maxine is because of the uncanny physical resemblance Maxine bears to the younger Pearl (West cleverly double-casted Goth as Maxine and Pearl, relying on heavy prosthetic makeup to artificially age Goth enough for the role).

Maxine’s personality matters little to Pearl, but what does matter is her body—something she is fiercely envious of, as well as serving as a constant reminder of her own advanced age today.

The depressing reality of age is a main focus for X, tying into it to the movie’s thematic exploration of sex in general. Obviously, as we get older, our health declines, our sexual desire wanes, and our appearances become less enticing to others. As the crew explains to Lorraine (Jenna Ortega), their promiscuity and casual approach to sex is based on their belief that one day, they simply won’t be able to have it anymore—which is, of course, very true.

As we see with Pearl, who literally cannot have sex with Howard anymore, the loss of sex causes her to realize her own mortality and the idea that she’s lost with the own thing she also believed made her “special”—her looks.

The manner in which these questions are framed harkens back to the old cliches found in practically every major slasher, calling the cliches’ validity and existence into question.

Referring once again back to the original Scream, the movie-buff Randy says that one of the rules to surviving a horror movie is 1) don’t have sex, and 2) don’t do drugs (among other things). If any character breaks these rules, it’s almost guaranteed they’re going to be killed off at some point.

Unlike most slashers, though, not only does X not end this way (subverting the stereotype by having the cocaine-snorting porn star Maxine as the sole survivor while the pure, “moral center” of the crew played by Ortega is killed off near the end [in promotional material for the movie, the movie brilliantly misled us into believing Ortega would be the star of the movie and “the final girl” that would survive to the end), but it asks the fundamental reasoning why these stereotypes exist in the first place. By having sex and doing drugs, do these characters deserve to die? Does it make them bad people?

The short answer is: of course not. To believe that would be totally ridiculous—absolutely nobody deserves to die for something most people do at some point in their lifetime. But never before has a horror movie actually stopped and taken the time to address the reasoning for this specific stereotype so fully before.

The film’s presentation and analysis of sex isn’t the only aspect of the slasher genre the film touches upon, though. Whereas we’re used to seeing barely-dressed young women being killed off in slashers, X features male characters walking around in their underwear or completely naked at night. Not only is it a clear, almost parodic gender reversal of the classic slasher stereotype, it’s also an effective way to depict the vulnerability of the two most overly confident, macho male characters (played by Martin Henderson and Scott Mescudi) who are caught literally with their pants down.

Even without the deep reading, you can do into the film’s portrayal of sex and gender (and you can do a lot of that—like a senior thesis level analysis of the movie’s treatment of the two), horror movie and slasher enthusiasts can still find a ton of things to enjoy about X. The dialogue and characters are interesting and engaging (an accomplishment not a lot of slashers can lay claim to), and the suspense—though perhaps drawn-out—is incredibly palpable. The movie includes homages and references to classic slashers before it, resembling a modern version of The Texas Chain Saw Massacre with the eery, Southern gothic atmosphere of Resident Evil 7.

It’s tense, violent, shockingly gory, and uncomfortably sexual in some places. Some viewers might find it a bit strange or even too sexual for their taste, but it’s a rare, well-thought-out slasher unlike most others, which is certainly more than can be said for the newer Netflix reboot of Texas Chainsaw Massacre or the critically-panned Halloween Kills.

2 Phrases To Use When Giving a Bad Boss Negative Feedback, According to a 19-Year Corporate CEO