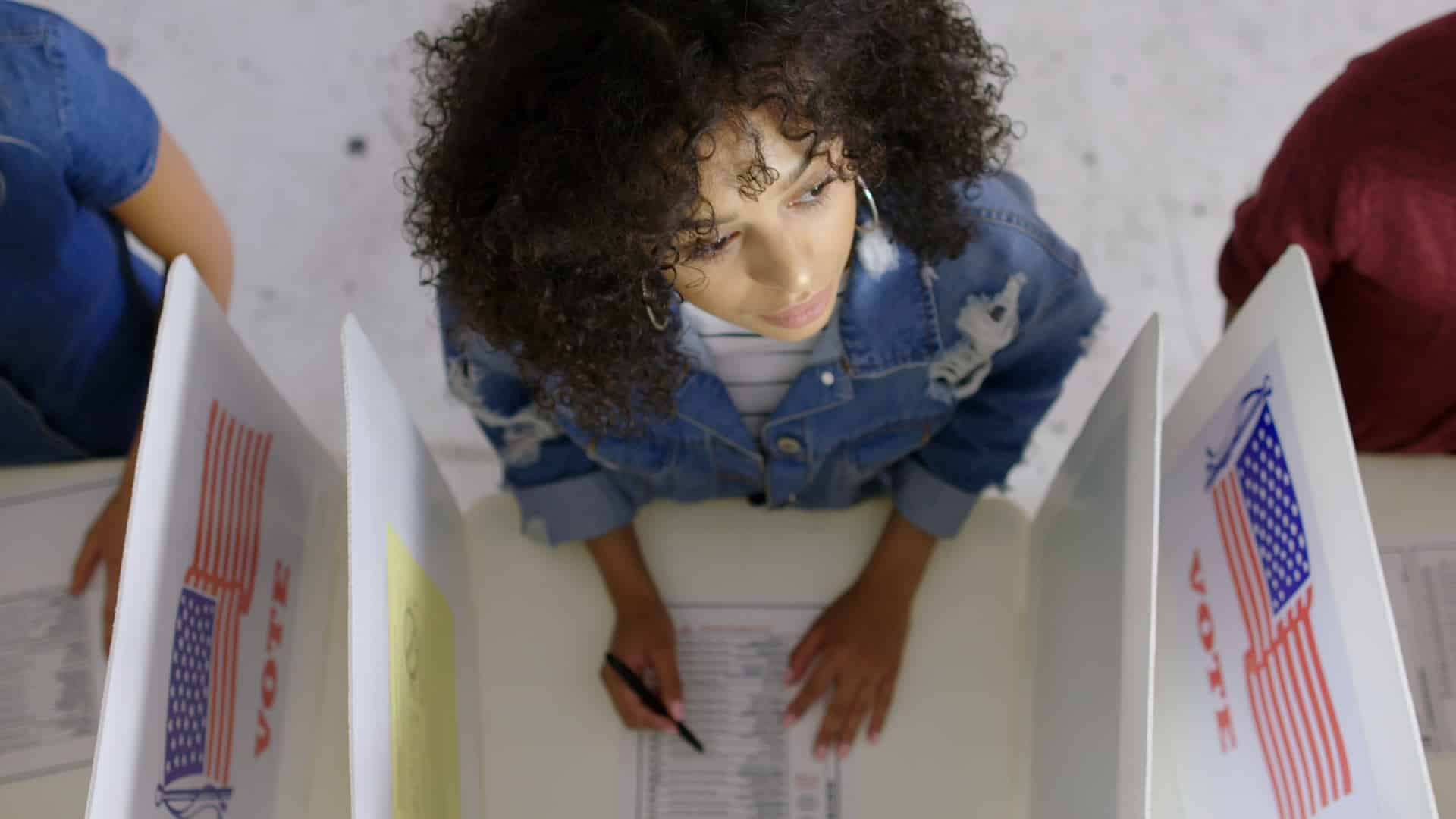 The United States is on the wrong track. At least, 86% of young voters think so.

Following the leak of the Supreme Court draft opinion that signaled the overturn of Roe v. Wade, a Teen Vogue x Change Research poll found many young voters don't believe the economic and political institutions are working for them — and they don't trust that the course will be corrected.

Now, months later, a new poll has come out, and while young voters are slightly more optimistic, the numbers indicate more work still needs to be done.

Time for a Change

Change Research surveyed 1,173 registered voters under the age of 35 to understand what is going on in the minds of young voters going into the midterm election. The survey is the second in a series of national polls of young voters conducted on behalf of Teen Vogue magazine.

The first poll was conducted when emotions were running high in the wake of the Dobbs decision, and now that things have settled and more changes have been made, voters have a chance to reevaluate their opinion in the wake of recent Democratic policy wins.

The main issue Democrats face when trying to win young voters is their failure to effectively communicate how young people's votes have translated into legislative action, according to the responses collected.

Change Research claims that young voters are “hungry for more progressive change” and are “clear-eyed about what the GOP will try to do if they win control of Congress.” Voters are also concerned about possible violent post-election clashes if the results are not accepted.

According to the survey, young voters are generally unhappy with the United States, its leaders, and its political parties, namely the Republican Party.

86% of voters say that the country is on the wrong track. Respondents overwhelmingly hold a negative opinion of the status quo on most major issues in America. 82% say that the state of the economy is poor/not so good, 73% share that opinion on gun control, 74% on abortion rights, and 92% on healthcare costs.

Around 6 in 10 young voters support the recent achievements of the Democratic Party.

When asked about these issues, roughly 4 in 10 voters say these actions count as significant steps forward. For example, 42% approve of the climate provisions in the Inflation Reduction Act (IRA), while 39% approve of the $10,000 in debt forgiveness, and 38% approve of the bipartisan gun safety laws.

One of the most significant achievements the Biden Administration accomplished recently is student loan forgiveness. Two-thirds of voters support this action, and 40% of young voters, including 52% of those currently paying off student loans, say that student debt forgiveness makes them even more supportive of Biden and the Democrats.

Change Research suggests that there may be a greater improvement in key measures if lawmakers and campaigns did a better job of directly communicating popular policies to young voters. Unfortunately, not very many voters are aware these policies exist.

Fewer than 30% of young voters have heard of the Bipartisan Safer Communities Act or the For The People Act.

Only 53% of voters were aware of any of the candidates for Congress in their area. The only notable policy changes and new legislation that is reaching young voters' ears are the Supreme Court overturning Roe v. Wade and the Biden Administration forgiving $10,000-$20,000 in federal student loan debt.

Young voters were asked what they do hear Democratic and Republican candidates talking about the most ahead of the election. They said that they hear about abortion the most from Democrats, and abortion, the economy, and immigration from Republicans.

99% of young voters have heard about the Dobbs decision. 65% of voters said that the leaked opinion back in May made them more motivated to vote in November, and 64% say the same today.

Another 62% say they would consider a state's abortion laws before deciding where to move in the future, and 41% report that they currently live in a state where abortion is partially or totally prohibited.

There is also a large gap between men and women on this issue. 76% of women say that the shifting abortion laws will affect them, with 48% saying it will directly impact them.

54% of men say it would not affect them, and only 9% say it would directly affect them. 55% of women are very or somewhat worried that they will have an accidental pregnancy and not be able to access abortion care, while only 27% of men are worried about their partner having an accidental pregnancy and not being able to access abortion care.

72% of women report that they will consider a state's abortion laws when deciding where to move in the future, while only 48% of men said they would make the same considerations.

What They Don't Want

75% of young voters believe that Republicans will likely pass a national abortion ban. 63% say that they believe the party will also outlaw certain forms of contraception, such as Plan B and IUDs.

60% of voters think that Republicans will attempt to undermine elections by making it more difficult for those they don't agree with to cast ballots. Only 41% think Republicans will make it easier for people like them to afford things, and 72% think they will likely cut taxes on corporations.

What They Do Want

Mike Pence: ‘There Might Be Someone Else I’d Prefer More’ Over Trump in 2024